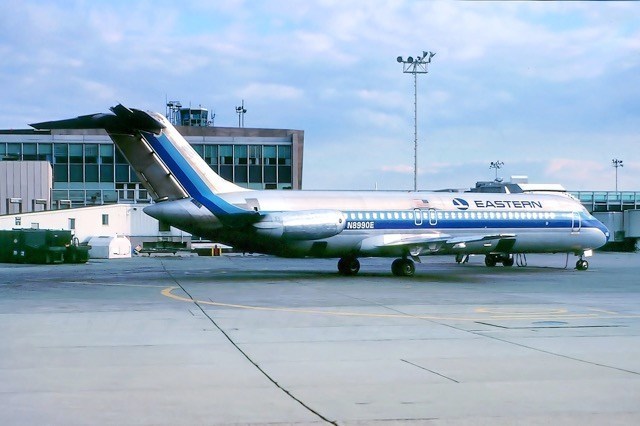 Fifty four years ago, on February 25, 1965, the first Douglas DC-9 took to the skies from Long Beach, California, and became one of the most popular passenger jets ever built. It was a completely new design, economical and perfect for short range flights to airports with small runways.

Eastern Air Lines began decades earlier as a small Philadelphia based airline. Led by World War I flying ace Eddie Rickenbacker, it quickly gained a near monopoly of the New York-to-Floridaroute, and dominated the East Coast market for decades. It expanded routes to Canada, Mexico, Caribbean, Latin America, and at one time, to Great Britain.  In 1971, with the purchase of Caribair, it acquired several DC-9-31s, including Tail N8990E. The DC-9 enabled the airline to continue its expansion and market domination for years.  During its last full year of business in 1990, it flew 16.50 million passengers through its Atlanta hub (74.7% of their total passenger base), with its DC 9 fleet carrying more than half of the total number of flights with around 390 per day. It continued to fly DC-9s until January 1991 when the airline closed its doors for good.

Tail N8990E was then decommissioned, and later broken up in 1994. It was rescued by MotoArt, and upcycled into pocket-sized, collectible PlaneTags™. “It’s like owning a piece of aviation history,” says owner Dave Hall. “The flight may be over. The airline may be gone…but you still have something you can hold and keep and pass down to the next generation.” Like other PlaneTags™, each features the original paint, with dents and other imperfections that make them unique. They are numbered in a limited edition series and have become mementos cherished by aviation enthusiasts.