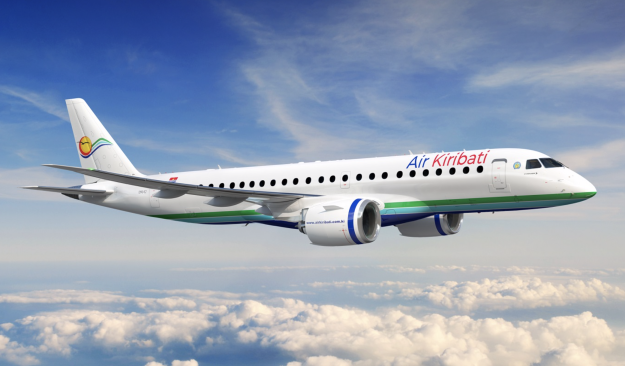 Embraer has announced the signing of a contract with the Government of Kiribati, in partnership with their national airline, Air Kiribati, for two firm orders for the E190-E2 E-Jets and two purchase rights for the same model.

With all purchase rights being exercised, the contract has a value of $243 million, based on current list prices. The order will be included in Embraer’s 2018 fourth-quarter backlog.

Scheduled for a 2019 delivery, the E190-E2 will enable the flag carrier for the Republic of Kiribati, located in the central Pacific, to fly longer domestic and international routes than it currently does with its turboprop fleet.

Air Kiribati will be the launch operator for the E190-E2 in the Asia Pacific region (excluding China). This order comes after a three-week Asia Pacific tour of the ‘Shark’ livery E190-E2 in October, which included a stop in Tarawa, the capital of Kiribati.

Spanning four time zones and comprised of more than 30 islands, Kiribati is the only country in the world to be in all four hemispheres.

With a maximum range of up to 2,850 nautical miles, the E190-E2 can operate over the vast expanse of Kiribati, including from Tarawa directly to Kiritimati (Christmas) Island, one of the most challenging routes in the Pacific. The current domestic connection from Tarawa to Kiritimati includes an international stopover in Fiji.