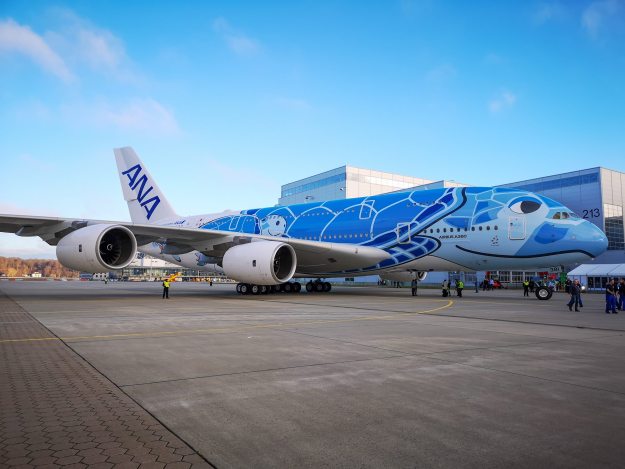 All Nippon Airways (ANA) has announced the schedule for the first Japanese-operated Airbus A380, which will fly between Tokyo Narita and Honolulu starting on May 24, 2019.

Sales for this flight will begin on Jan. 10, 2019 for the newly introduced First Class and ANA COUCHii in Economy Class.

ANA currently has two flights departing from Tokyo Narita to Honolulu. Starting May 24, the earlier flight will be serviced by its first Airbus A380 on Tuesdays, Fridays and Sundays.

Then, starting on July 1, 2019 the second A380 will start operating, and the A380 will begin servicing the earlier flight on a daily basis. The A380 will service the later flight on Tuesdays, Fridays and Sundays*1. This will result in a total of ten roundtrips per week serviced by the A380, all other Narita-Honolulu flights will be operated on a Boeing 787-9.

The special aircraft will accommodate First Class, Business Class, Premium Economy, Economy Class seats and ANA COUCHii seats, a first for a Japanese carrier. The First Class and ANA COUCHii seats will go on sale starting January 10, 3:00 p.m. (Japan Time). Meanwhile, passengers who have already purchased tickets in the remaining classes will be notified that their seats have changed to the FLYING HONU after January 4.

Furthermore, to commemorate the launch of the FLYING HONU, ANA will be running special campaigns for flights departing between May 24 and July 11. The campaigns include offering a discount of up to 50 percent on the ANA COUCHii and allowing ANA Mileage Club members unlimited access to available seats in Premium Economy and Economy Class to book their award tickets. ANA Mileage Club members will also have a chance to gain back all of their miles used for buying the award ticket.

The FLYING HONU is a product of ANA’s continued commitment to improving the travel experience, while helping passengers reach the world’s premier tourist destinations.

*1 The operation dates and aircraft types are subject to government approval and may change without notice.

In other news, All Nippon Airways (ANA) will begin offering services between Tokyo and Perth, Australia in September 2019. The flight will be based out of Narita International Airport and offer direct services to Perth, Australia’s fourth largest city. This makes ANA the first Japanese carrier to fly to Perth from Japan on a regular basis.

The announcement of this new route comes as ANA is preparing to extend services to Vienna, Austria in February 2019. As ANA continues seeking to better serve consumers worldwide, it will do everything possible to expand its network to so far un-served destinations and make traveling as safe, pleasant and convenient as possible.

All images by ANA.