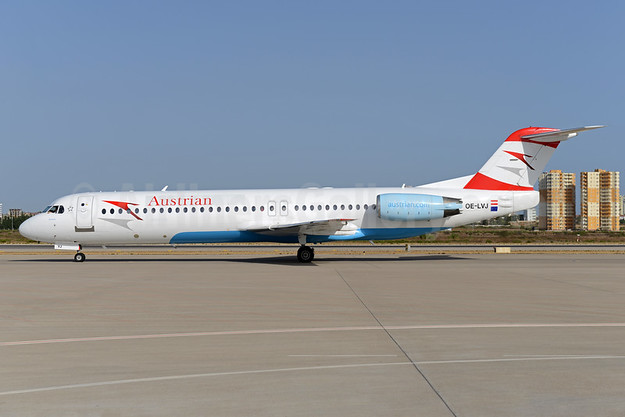 Austrian Airlines (Vienna), as planned, operated the last Fokker 100 revenue flight on December 31, 2017. The last flight was flight OS 778 from Pristina to the Vienna base with the OE-LVE.

Previously on the morning of November 29, 2017, employees, invited guests and members of the Friends of Vienna Airport Association had the opportunity to officially bid farewell to the beloved Fokker fleet of Austrian Airlines via the special flight OS 1100.

The last Fokker 100 aircraft still operated by Austrian Airlines, bears the registration number OE-LVE and the name “Zagreb”. The guests flew one last circuit over Austria in this aircraft under a clear blue sky.

The first Fokker 50 was authorized for operation on March 15, 1988 under the Air Operator Certificate (AOC) of Austrian Airlines. Two additional Fokker 70 jets were added in 1995. At that time, this type of jet was considered to belong to the next aircraft generation. Among the advantages were the low levels of noise generation and greenhouse gas emissions, combined with the higher speed and range compared to other aircraft models. Within the context of its Focus East strategy, Austrian Airlines acquired additional Fokker planes in 2004, including Fokker 100 aircraft. In 2015, the Austrian flag carrier decided to replace its entire aging Fokker fleet, consisting of 21 jets, with 17 modern Embraer aircraft. In August 2017, Austrian Airlines successfully concluded the integration of this new type of aircraft into its fleet.

The last remaining Fokker 100 was operated until December 31, 2017 mainly on routes to Geneva and Chisinau.

The Austrian Airlines Fokker fleet was sold to the Australian charter airline Alliance Aviation Services Limited for $15 million (US). The maintenance of the fifteen Fokker 100 and six Fokker 70 aircraft continues to be carried out by the Fokker specialists at Austrian Technik in Bratislava (ATB).