United Airlines increases to daily service between Houston and Havana 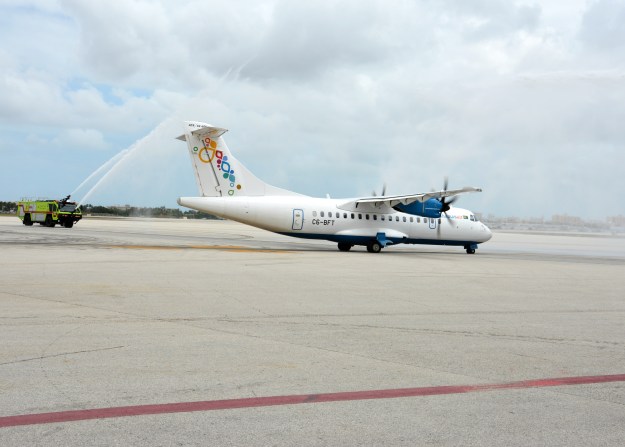 On May 3, officials from the Miami-Dade Aviation Department and Bahamasair celebrated the airline’s launch of four weekly flights between Miami and Bimini with a ribbon-cutting ceremony and gate reception at Miami International Airport for the route’s first passengers.

Miami-Dade Aviation Director Lester Sola (center) and officials from Bahamasair and the Bahamas cut the ceremonial ribbon at the launch of direct service to Bimini. (PRNewsfoto/Miami International Airport)

The inaugural departure flight to Bimini was sent off to the rhythm of a Junkanoo band and received a water cannon salute from Miami-Dade Fire Rescue.

Bahamasair currently flies to Nassau from Miami daily. The new route, served by ATR 42 aircraft that seats 50 passengers, will be MIA’s only service to Bimini and its seventh destination in the Bahamas. More than half a million passengers travel between MIA and the Bahamas annually.

Bahamasair is the latest airline to launch new service at MIA this year, following LATAM Airlines beginning a weekly flight to Salvador, Brazil – MIA’s ninth Brazilian destination – on April 29. Next month, Air Italy will enter the Miami market with four weekly flights to Milan on June 8; and American Airlines will launch daily service to Savannah, Georgia on June 7, followed by a weekly flight to Bonaire, Lesser Antilles on June 9. Later this year, Brazilian low-cost carrier GOL will return to MIA with daily flights to Brasilia and Fortaleza on November 4, and American Airlines will launch new service to Georgetown, Guyana; Pereira, Colombia; and St. Vincent and the Grenadines in December.