Eurowings creates this unique livery with this wet lease 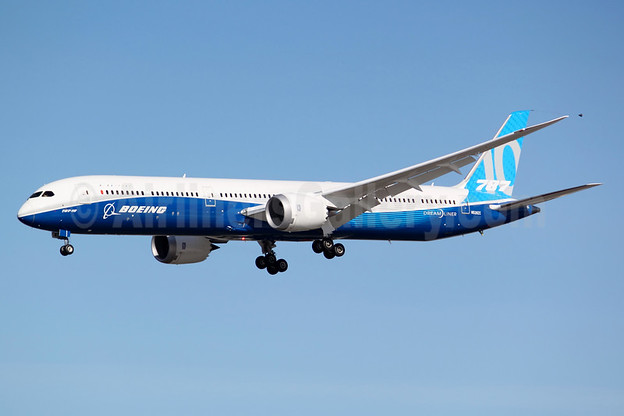 Boeing delivered more commercial airplanes than any manufacturer for the sixth consecutive year and set an industry record with 763 deliveries in 2017, driven by high output of the market-leading 737 and 787 jets. At the same time, the company grew its backlog with 912 net orders, reflecting healthy demand for its single-aisle and twin-aisle airplanes.

Boeing reached a new high on the 737 program as it raised production to 47 airplanes a month during the year and began delivering the new 737 MAX, contributing to a record 529 deliveries, including 74 of the MAX variety. On the 787 Dreamliner program, Boeing continued building at the highest production rate for a twin-aisle jet, leading to 136 deliveries for the year.

On the orders front, 71 customers placed the 912 net orders, valued at $134.8 billion at list prices. The total extends Boeing’s backlog to a record 5,864 airplanes – at year end – which is equal to about seven years of production.

In 2017, the 787 Dreamliner family racked up nearly 100 net orders and the 777 family captured 60 net orders, as shown in the table below. A detailed report is available on Boeing’s Orders and Deliveries website.

Other major commercial airplanes milestones include the first flights of the 737 MAX 9 and the 787-10 Dreamliner, and the start of production of the 737 MAX 7 and the new 777X.