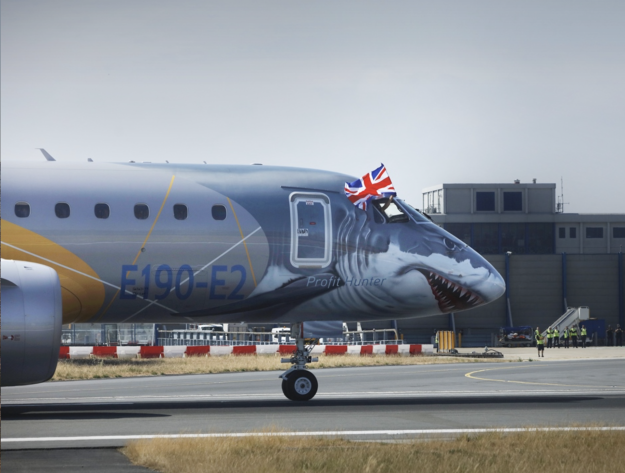 On July 13, 2018 an Embraer E190-E2 aircraft landed for the first time at London City Airport (LCY). The newest aircraft from Embraer, the world’s quietest and most efficient in its class, entered into service in April this year. An aircraft from Embraer’s test fleet stopped off at LCY on its way to appear at next week’s Farnborough Air Show. The visit demonstrates the importance Embraer places on being able to offer LCY capability to airlines and its intention to work with London City Airport to certify the E2 to meet customer demand, which is likely to rise as LCY increases connectivity.

Arjan Meijer, Chief Commercial Officer, Embraer Commercial Aviation, said, “For Embraer, London City feels like home, wherever you look, our aircraft are there. So it’s a big moment for us to bring the newest generation Embraer jet to this important European hub. We know that passengers will love the new aircraft, still with no middle seats and featuring larger overhead bins, and Londoners will also appreciate the quietness of the aircraft and its low emissions.”

London City Airport is London’s most central airport, known for its convenience and speedy passenger experience. Its location means operating aircraft have to be compatible with the airport’s steep approach and short runway. Embraer aircraft are well suited to this and have operated from LCY since 2009, when BA Cityflyer started operations with the E170. Embraer aircraft accounted for nearly 60% of departures from LCY in 2017.

Richard Hill, Chief Commercial Officer at London City Airport, said: “to welcome the Embraer E2 to London City Airport for the first time is a crucial milestone towards certification and subsequent commercial operation at London’s most central airport. The first generation of E-Jets have been intrinsic to London City’s growth, so much so that up to three quarters of all passengers now land or depart on the aircraft. As we continue a £480m transformation, due for completion in 2022, the E2 has enormous potential for London City, with proven ability to operate with less noise, fewer emissions, and better fuel efficiency to open up new destinations, delivering significant benefits for our airline customers, passengers and local neighbors.”

In certification testing EASA figures confirmed the E190-E2 has the lowest noise levels among all new generation single aisle aircraft. If this performance can be replicated in the operational environment of London City Airport, the E190-E2 would meet the minimum noise restrictions of the airport’s new Aircraft Noise Categorisation Scheme (ANCS), which will be fully introduced next year. The E190-E2 is the first of a new generation of crossover narrowbody jets from Embraer. The aircraft entered into service with Norwegian carrier Widerøe in April.

The E195-E2 goes into service next year with Azul in Brazil. The E190-E2 cuts fuel burn by more than 17%, and is the quietest passenger jet in the world today both in the cabin and outside.

Since entering revenue service, the E-Jets family has received more than 1,800 orders and over 1,400 aircraft have been delivered. Today, E-Jets are flying in the fleet of 70 customers in 50 countries. The versatile 70 to 150-seat family is flying with low-cost airlines as well as with regional and mainline carriers.