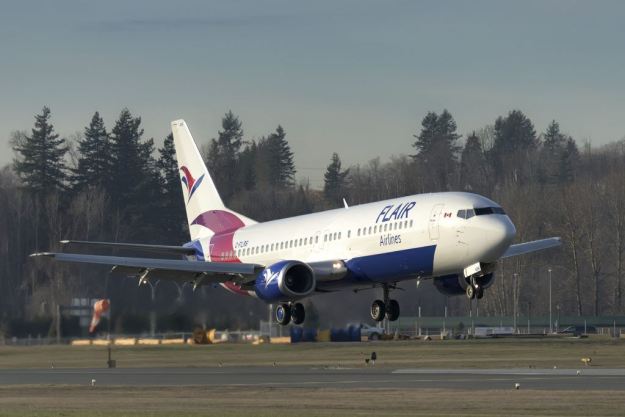 Flair’s Executive Chairman, David Tait, stated, “Today is a momentous day in our history as it the first of our multiple new trans-border services.” In December Flair will begin flying to Palm Springs, Miami, Orlando and Mesa.

The B2B Alberta-Nevada all-day meeting on Nov. 9th was inspired by the offer extended from Flair to fly US government and business delegates from Las Vegas to Edmonton – as the airline’s guests.  “We’re delighted that so many international trade delegates and State Senator James Ohrenshall have taken advantage of our offer to enhance the business relationship between Alberta and Nevada,” stated Tait.

Flair Airlines flight 777 was welcomed in Vegas to the salute of water cannons, Elvis, and Showgirls.  “We are pleased to welcome Flair Airlines to McCarran International Airport in Las Vegas and wish it great success with these new air service offerings from Edmonton,” said Chris Jones, chief marketing officer for the Clark County Department of Aviation.

All photos by Flair Airlines.