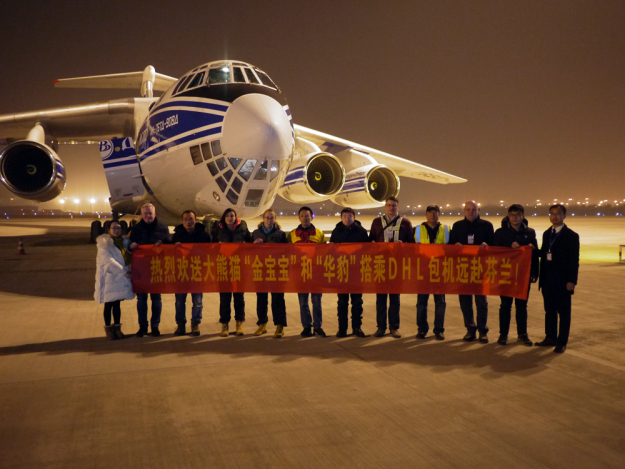 Giant Pandas Lumi and Pyry have settled into their new home at Ahtari Zoo in Finland after travelling from China onboard one of Volga-Dnepr Airlines’ freighter aircraft.

The delivery of Lumi and Pyry was performed under a joint program of the People’s Republic of China and Finland aimed at the preservation and study of giant pandas. Their arrival in Finland followed the signing of an agreement in 2017 by the Preservation and Research Center for Giant Pandas in Dujiangyan, which agreed to transfer the two pandas to Ahtari Zoo for a set time period.

During the flight, the pandas were accompanied by one of their keepers and a vet from the Finnish zoo, who ensured their safety and well-being throughout the journey. To monitor the conditions onboard the aircraft, special measuring equipment was acquired for the flight. One hour before landing, the crew gradually lowered the temperature in the cargo hold to 10°C to help the pandas acclimatize gradually for their arrival in snow-covered Helsinki. Onboard the aircraft, they enjoyed their usual food rations, including chopped bamboo shoots, carrots and apples.

In support of other wildlife preservation projects, in recent months Volga-Dnepr Airlines has safely delivered two Southern White Rhinos from the Zoological Center Ramat Gan in Israel to Rostov-on-Don Zoo in Russia, while the Group’s Atran Airlines delivered rare and protected Przhevalsky horses for Orenburgsky National Nature Reserve for a third time as part of a reintroduction program in Russia’s Ural Steppe.

The Chinese preservation park held an official farewell ceremony for the pandas, which was widely covered by local and national Chinese media. Finland’s Ambassador in China was on hand to issue symbolic Schengen visas to the pandas.

Lumi and Pyry were greeted by Finland’s Minister of Agriculture and Forestry, China’s Ambassador to Finland, Ahtari authorities and other distinguished guests at the VIP terminal at Helsinki Vantaa Airport.

To mark the special mission, a special giant panda sticker was placed on the fuselage of Volga-Dnepr’s IL-76TD-90VD.

Lumi and Pyry are expected to live at Ahtari Zoo for between 10 to 15 years and will return to their homeland after that. Their cubs, if any, will also go to China with their parents, which is provided under the agreement.