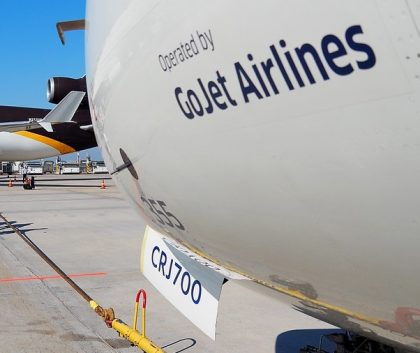 GoJet Airlines today announced it is expanding its fleet of Bombardier CRJ550 aircraft with the addition of 20 new aircraft.  The announcement follows GoJet’s 10-year agreement to operate 54 CRJ550 aircraft for United Airlines and will bring GoJet’s total CRJ550 fleet count to 74 by 2021.

The CRJ550 is the world’s only two-cabin 50-seat regional aircraft designed for business and leisure travelers who want true-first-class seating, Wi-Fi, more leg room and enough space for every customer to bring a roller bag on board. Since entering service in October 2019, the CRJ-550 has revolutionized the regional flying experience with enhancements unavailable on other regional jets.

The CRJ550 is a first-of-its-kind jet boasting a wide variety of premium amenities, including 10 seats in United First, 20 seats in Economy Plus, and 20 Economy seats; space for every customer to bring a roller bag on board; a self-serve refreshment center for United First customers with a wide assortment of snacks and beverages; more overall legroom per seat than any other 50-seat aircraft flown by a U.S. airline, and the ability to stay connected while in flight with United Wi-Fi. All aircraft will be equipped with in-seat power throughout the cabin in the coming months.

GoJet expects to start taking deliveries of these additional aircraft in the summer of 2020.