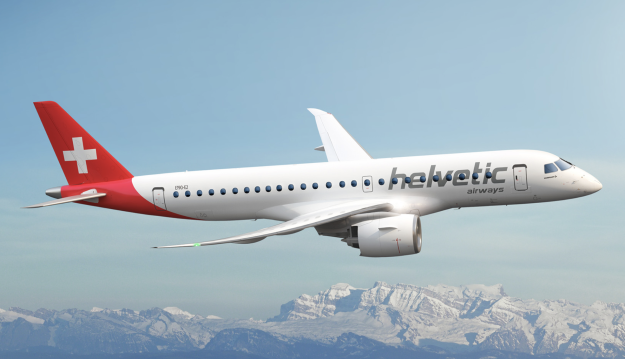 Embraer and Helvetic Airways have signed a contract for a firm order of 12 E190-E2 jets.

This agreement was announced as a Letter of Intent (LOI) at the recent Farnborough Air Show, in July.

The firm order has a value of $730 million, based on current list prices, and will be included in Embraer’s 2018 third-quarter backlog. The contract also includes purchase rights for a further 12 E190-E2, with conversion rights to the E195-E2, bringing the total potential order up to 24 E-Jets E2s.

With all the purchase rights being exercised, the deal has a list price of $1.5 billion. The announcement was made by the two companies during the Zurich debut of the E190-E2, the world’s most efficient and quietest single-aisle aircraft, as part of its tour of Europe and the Commonwealth of Independent States (CIS).

The purchase options for a further 12 aircraft (E190-E2 or E195-E2) will enable Helvetic Airways to grow according to market opportunities. Embraer is the world’s leading manufacturer of commercial jets up to 150 seats. The Company has 100 customers from all over the world operating the ERJ and E-Jet families of aircraft. For the E-Jets program alone, Embraer has logged more than 1,800 orders and 1,400 deliveries, redefining the traditional concept of regional aircraft.