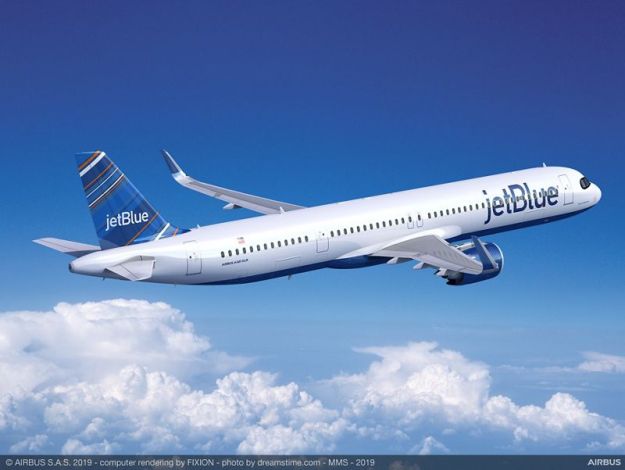 JetBlue Airways today announced it is converting 13 aircraft in its existing Airbus A321neo order book to the XLR version for delivery scheduled to begin in 2023. The aircraft will support JetBlue’s focus city strategy by allowing the airline to implement further expansion to additional European destinations from Boston and New York, while also providing added fuel efficiency.

The airline also announced it is exercising its option to add 10 additional A220-300 aircraft to its order with delivery beginning in 2025. Together both aircraft ensure the best financial performance of JetBlue’s fleet, while providing maximum flexibility to execute its network strategy. These aircraft are both game changers in regards to enhancing the airline’s industry-leading customer experience.

Introduced just this week at the Paris Air Show, the A321XLR is the latest evolution of the A321neo aircraft family and features an extended range of 4,700 nautical miles – some 600 nautical miles more than the A321LR aircraft. The increased flying distance is made possible with an additional rear center tank for more fuel volume. And with 30% lower fuel burn per seat than previous-generation aircraft, JetBlue can maximize the benefits of single-aisle aircraft economics.

The A321XLR also allows JetBlue to evaluate new transatlantic options as the airline explores additional destinations it may serve in Europe. The XLR opens up possibilities for service between the northeast U.S. and destinations in south, central and northern Europe.

As announced in April 2019, JetBlue intends to launch service to London from New York-JFK and Boston in 2021 using the A321LR (long range) aircraft. Today’s XLR news builds on the previously announced conversion of 13 A321neos to the A321LR aircraft.

Like London, JetBlue will explore European cities that suffer from high fares or mediocre service and those which are effectively controlled by legacy carriers and their massive joint ventures. JetBlue is developing a reimagined transatlantic version of its premium Mint product, as well as an enhanced transatlantic Core experience for the A321XLR. With both the A321LR, and now the A321XLR, the customer-favorite airline intends lower fares while raising the bar on what travelers can expect from a low-cost carrier when flying across the Atlantic.

The A220 and Continued Growth in the Americas

By exercising its option to add 10 additional A220-300 aircraft to its existing order, JetBlue will grow its total number of A220s on order to 70.

The A220’s spacious and comfortable cabin makes it the perfect fit for JetBlue, which has consistently led U.S.airlines in the onboard experience. The A220’s cabin design offers customers the best inflight experience with wider seats, spacious overhead bins and extra-large windows that offer a great view from the sky and on the ground.

The aircraft’s range and seating capacity will add flexibility to JetBlue’s network strategy as it targets growth in its focus cities, including options to schedule it for transcontinental flying. The aircraft also opens the door to new markets and routes that would have been unprofitable with JetBlue’s existing fleet.

The initial order for 60 A220 aircraft – announced in July 2018 – will be phased in as replacements for JetBlue’s existing fleet of 60 Embraer E190 aircraft.