JetBlue reflects on 15 years of operations in Boston

Cargojet retires the last Boeing 727, the end of an era

JetBlue reflects on 15 years of operations in Boston 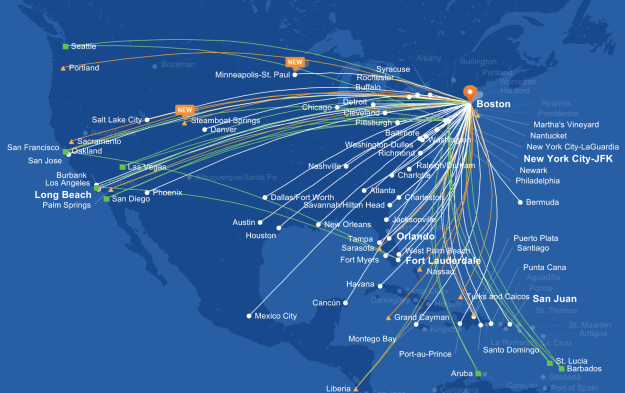 Since its arrival in Boston in 2004, JetBlue Airways has played an instrumental role in transforming air travel for the Commonwealth and customers traveling through Boston Logan International Airport. JetBlue, which today celebrates its 15th anniversary of operations at Logan, has significantly grown its footprint in the market, leading the way in number of nonstop destinations served, customers carried and total daily departures.

JetBlue first began service in Boston on January 7, 2004, with the airline operating about 4,500 flights from one gate in the first year. While every major U.S. airline had a sizable presence at the time, no single carrier was the clear market leader. With the ‘JetBlue effect’ in action, the airline shook up the market with its low-fare approach, driving down prices and introducing a slew of new destinations for Logan travelers. Fast forward 15 years, JetBlue has become the leading carrier in Boston, with nearly 70 nonstop destinations served, more than 150 daily flights and close to 55,000 annual departures, making up 30 percent of Logan’s overall traffic. JetBlue has also grown its roster of airline partners since entering Logan, offering up global destinations for customers on 20+ international carriers.

“When we first entered Boston, JetBlue was very young. Fifteen years later, it’s exciting to see how far we’ve come and where we’re heading,” said Marty St. George, executive vice president of commercial and planning, JetBlue. “Boston is our home, and we’re committed to providing the low fares, award-winning service and amenities that have made JetBlue the number one choice for travel at Logan.”

“Massport applauds JetBlue for their 15 years of offering exciting travel opportunities for the entire New England region,” said John Pranckevicius, acting CEO, Massport. “We look forward to continuing our strong partnership with JetBlue while providing our business and leisure customers with even more options for travel in the future.”

JetBlue in the Community

JetBlue prides itself on supporting the causes, teams and places its customers and crewmembers are most passionate about. Since 2011, JetBlue crewmembers have contributed more than 48,500 hours of service to a variety of causes and nonprofits throughout New England, such as KaBOOM!, Save the Harbor/Save the Bay, Wings for Autism® and Make-A-Wish® Massachusetts and Rhode Island, among many others.

JetBlue is also the proud official airline sponsor for all four major sports teams including the Boston Celtics, Boston Red Sox, Boston Bruins and New England Patriots, along with the annual Boston Marathon and venues including TD Garden, The Wang Theatre, The Shubert Theatre and the Isabella Stewart Gardner Museum.

JetBlue is on track to reach 200 daily departures in the coming years. Working closely with Massport, the airline continues to make investments to maintain its leadership position in its second-largest focus city. JetBlue plans to expand its footprint from 24 to 30 gates by 2021. Starting in 2020, JetBlue will also steadily replace its Embraer E190 fleet with the larger and more fuel-efficient Airbus A220, providing more seats in the market at a lower operating cost.