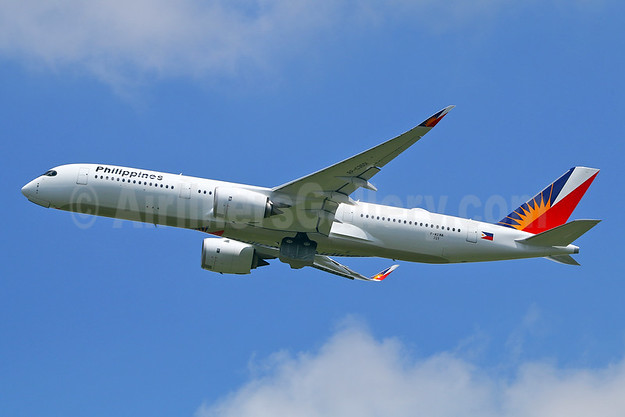 Philippine Airlines (PAL) has taken delivery of its first Airbus A350-900 at a special event in Toulouse, France, becoming the 19th airline to operate the world’s most modern and efficient long range airliner.

Altogether, Philippine Airlines has ordered six A350-900s, which will be primarily operated on nonstop services to Europe and North America. These will include the carrier’s longest route to New York, which the A350-900 can operate nonstop in both directions, all year round. Representing a distance of over 8,000 nautical miles, the 17 hour return journey from New York to Manila previously involved a technical stop in Vancouver.

Philippine Airlines has configured its A350-900s with a premium three class layout seating 295 passengers in three classes. This including 30 seats that convert to fully flat beds in Business Class, 24 offering extra space in Premium Economy and 241 18-inch wide seats in the main cabin.

The aircraft features the award-winning Airspace by Airbus cabin, with more personal space and full connectivity throughout. The cabin is the quietest of any twin aisle aircraft and features the latest mood lighting and air conditioning systems. Higher humidity levels and a lower cabin altitude all contribute to added well-being on board, especially for long range flights.

At the end of June 2018, Airbus has recorded 882 firm orders for the A350 XWB from 46 customers worldwide, already making it one of the most successful widebody aircraft ever. 182 A350 XWBs have been delivered to 19 airlines worldwide.