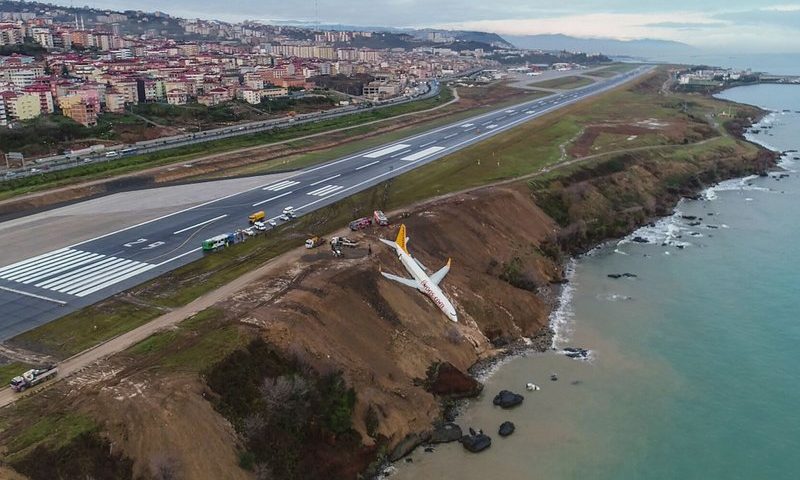 TOPSHOT - A Pegasus Airlines Boeing 737 passenger plane is seen struck in mud on an embankment, a day after skidding off the airstrip, after landing at Trabzon's airport on the Black Sea coast on January 14, 2018. A passenger plane late on January 13 skidded off the runway just metres away from the sea as it landed at Trabzon's airport in northern Turkey. The Pegasus Airlines flight, with 168 people on board, had taken off from Ankara on its way to the northern province of Trabzon. No casualties were reported. / AFP PHOTO / IHLAS NEWS AGENCY / STRINGER / Turkey OUT (Photo credit should read STRINGER/AFP/Getty Images)

A plane carrying 168 people skidded off a runway in northern Turkey Saturday night, stopping on a muddy slope just above the Black Sea.

None of the passengers or crew members on the Pegasus Airlines flight were hurt as a result of the unexpected detour off the runway at the Trabzon Airport in the city of Trabzon.

Photos of the incident show the commercial plane sitting halfway down a cliff off the runway and above the Black Sea. A government agency is investigating the incident to learn how and why the plane left the runway, according to the Associated Press.

Passenger Fatma Gordu told a local news agency that the plane “swerved all of a sudden.”

“The front of the plane crashed and the back was in the air,” she said, according to the AP. “Everyone panicked.”