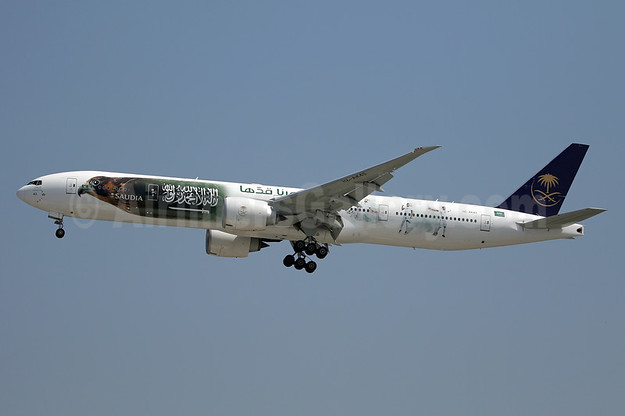 Saudi Arabian Airlines (Saudia), the national flag carrier of Saudi Arabia, achieved significant growth in terms of the number of guest numbers and flights during the first half of 2018.half of 2018

The airline carried approximately 17 million passengers across its domestic and international network. As a result, the carrier’s passenger rate increased by 8% and overall, the number of flights increased by 4%, compared to the same period in 2017.

Passenger traffic grew by 3.7% for domestic and international passenger numbers grew by 12%.

Saudia’s operating performance has recorded ongoing growth in line with the objectives and initiatives of the SV2020 Transformation Program, which was launched in mid- 2015.

These initiatives altogether form the largest program in the history of the airline, which is aimed at growing the carrier’s fleet to reach (200) airplanes by the end of 2020, as well as introducing a new range of product and services enhancements.

The introduction of new aircraft in the Saudia fleet has contributed to the airline reaching its strategic objectives, by adding seat capacity on domestic sectors, as well as expanding its international operations.

Saudia has grown its flight network this year to operate new nonstop flights to a mix of business and leisure international destinations (Vienna, Moscow, Malaga and Izmir).

Saudi Arabian Airlines Director General His Excellency Eng. Saleh bin Nasser Al-Jasser said that the carrier continued to achieve an increase in growth rates in its operating flights during the first half of 2018, which reflects the overall growth in the airline and subsidiary companies and strategic business units.

He added: “The operating performance outlined in the H1 annual report is issued at a time when Saudia is implementing its largest operating plan for the Summer season, which commenced on 23 Ramadan and that it will continue to 27 Dhu al-Hijjah next year. Furthermore, this plan includes running more than 56 thousand scheduled flights in both domestic and international flight sectors, with a seat capacity of more than 12 million. It is also worth highlighting that this plan includes the Hajj and Umrah flights, as well as other flights.”

Eng. Saleh Al-Jasser noted that the introduction of new aircraft to the fleet and operating the fleet at optimal levels have played a key role in supporting the operating plan of the carrier during the current high season. He added that increasing capacity in the domestic market has been a continued focus; ensuring seats are available for a growing traveler base.

Moreover, he stated that Saudia’s fleet is growing substantially (double-digits in a single year), and as a result, flies one of the youngest fleets in the skies.

Al-Jasser added: “Overall, connectivity and access to markets has increasingly become ever-important for trade and tourism. The growth of business opportunities and leisure travel – within the Kingdom and beyond – has been a core driver to offer our guests additional flight choices, with convenient journey times.
Mr. Al-Jasser reinforced that that the national carrier will continue working towards achieving operational performance, such as On-Time-Performance and increasing guest numbers by the end of 2018.

He praised the efforts of all teams across the company and strategic business units of Saudi Arabian Airlines, saying that they have contributed to SAUDIA’s growth. He also affirmed that the airline is planning to continue growing capacity on existing and new routes, in addition to adding new products and services.

The carrier is committed to further developing the aviation industry in the Kingdom, as aviation is one of the Kingdom’s Vision 2030’s focus points for development and investment.

In 2017 the airline carried more than 32 million passengers, registered over 200,000 flights and traveled more than 320 million kilometers. The airline grew its international transit traffic figures by double-digits over last year’s figures, and added 30 new aircraft to its fleet in a single year.

Saudia joined the SkyTeam alliance in 2012 and is one of 20 member airlines.