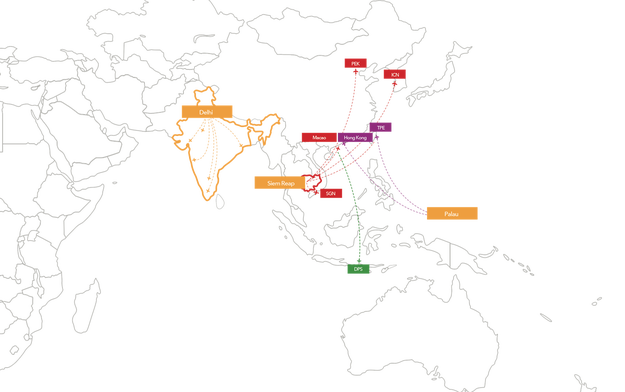 Small Planet Airlines Company Ltd. is expanding its Asian route map. The Cambodian-based company will fly tourists from its bases in Siem Reap and Palau to a variety of destinations ranging from Bali and Taipei to Macau or Hong Kong – the airports that also serve as major transit hubs in the region.

From its main Cambodian base in Siem Reap, Small Planet Airlines will take off to the glamorous casinos-city Macau and Taipei – the Taiwanese capital, offering holidaymakers the famous breath-taking views from its iconic skyscrapers. By the way, the airline’s base in Siem Reap is no less popular – it houses the world-famous temples of Angkor Wat and offers vibrant nightlife on the city’s Pub Street.

The secondary base in Palau invites diving enthusiasts and offers a dip in the pristine waters of Jellyfish Lake. The Small Planet Airlines Airbus A320 aircraft will take off from Palau to Hong Kong, Asia’s bustling financial metropolis, the Taiwanese capital of Taipei, and Macau.

From Macau international airport, travellers will reach numerous landmarks in the region – from jungle, rice terrace and beach-famous Bali, to one of the finest deep-water harbours in the world in Cam Ranh, Vietnam. In the near future, flights will also take off to Kota Kinabalu in Malaysia, known for its traditional markets and scenic views.

At the moment, Small Planet Airlines Company Ltd. (Cambodia) operates a fleet of two Airbus A320 aircraft. The number is estimated to grow to six or even eight aircraft by the end of 2018.

Small Planet Airlines Cambodia is the name of Small Planet Group’s Cambodian subsidiary, created to reduce the effects of seasonality on its business that offers holiday charters through its European bases. As Small Planet Group had ended a five-year agreement with Sky Angkor Airlines to operate chartered services to other East Asian destinations, it sought a base in Cambodia to provide a more secure foothold in the market. In September 2016, Small Planet applied to Cambodia’s State Secretariat of Civil Aviation (SSCA) for an air operator’s certificate to establish a Cambodian carrier based at Siem Reap. Small Planet Airlines Cambodia planned to operate charter flights from Siem Reap to destinations in South Korea and China.

The airline completed its first demonstration flight from Siem Reap on September 23, 2017. Small Planet Airlines was granted an air operator’s certificate in October 2017 to operate flights using Cambodia as a regional hub. It started commencing flights on November 27, 2017 from the capital Phnom Penh to the world heritage site Angkor Wat near Siem Reap with Airbus 320-200 registered in Cambodia.