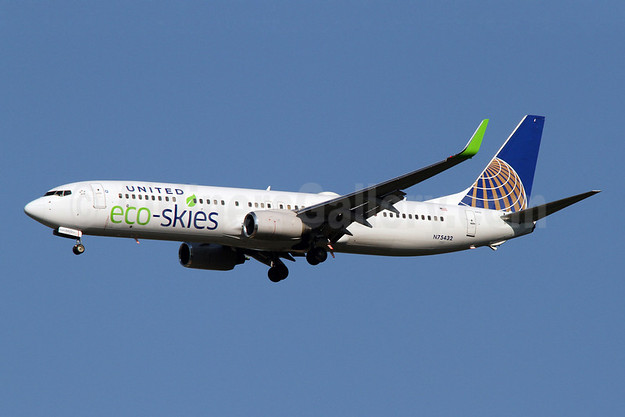 United Airlines today made history by becoming the first U.S. airline to publicly commit to reducing its own greenhouse gas emissions by 50 percent by 2050, further strengthening the carrier’s ambition to be the world’s most environmentally conscious airline. United’s pledge to reduce its greenhouse gas emissions by 50 percent relative to 2005 represents the equivalent of removing 4.5 million vehicles from the road each year, or the total number of cars in Los Angeles and New York City combined. The airline will continue to invest in the company’s ongoing environmental initiatives to support this commitment, including expanding the use of more sustainable aviation biofuels, welcoming newer, more fuel-efficient aircraft into its fleet and implementing further operational changes to better conserve fuel.

“At United, we believe there is no point in setting challenging and ambitious goals without also taking tangible steps towards achieving them, especially when it comes to securing the health of our communities and our planet,” said Oscar Munoz, United’s chief executive officer. “While we’re proud to be first U.S. carrier taking such an ambitious step, it is a distinction we look forward to sharing as the rest of the industry catches up and makes similar commitments to sustainability.”

To celebrate this significant milestone, United will operate flight 44 tomorrow from its hub in San Francisco to Zurich with the carrier’s most fuel-efficient aircraft – the Boeing 787 – via a blend of sustainable aviation fuel supplied by World Energy’s California-based AltAir Fuels. The airline will use 16,000 gallons of biofuel at a 30/70 blend with conventional jet fuel for the flight to Zurich, representing the longest transatlantic flight to date – and longest by a U.S. airline – powered by a biofuel volume of this size. United has sourced more than 2 million gallons of sustainable aviation biofuel since 2016 and is responsible for more than 50 percent of the airline industry’s commitments to biofuel.

United’s commitment to reduce its greenhouse gas emissions represents yet another first for the airline in an extensive list of innovative initiatives undertaken to reduce its impact on the environment. Several of United’s most significant environmental achievements include:

United’s award-winning Eco-Skies program represents the company’s commitment to the environment and the actions taken every day to create a sustainable future. In 2017, Air Transport World magazine named United the Eco-Airline of the Year for the second time since the airline launched the Eco-Skies program. This year, United Airlines ranked No. 1 among global carriers in Newsweek’s Global 500 Green Rankings, one of the most recognized environmental performance assessments of the world’s largest publicly traded companies.