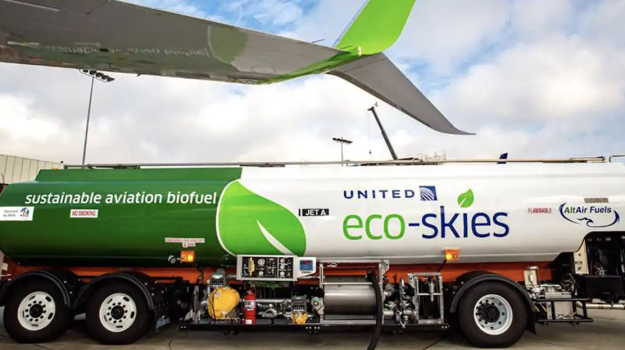 United Airlines today is taking its most ambitious step yet in leading the fight against climate change: pledging to become 100% green by reducing its greenhouse gas (GHG) emissions by 100% by 2050. United, which in 2018 became the first U.S. airline to commit to reducing its GHG emissions by 50% by 2050, will advance towards carbon neutrality by committing to a multimillion-dollar investment in revolutionary atmospheric carbon capture technology known as Direct Air Capture  – rather than indirect measures like carbon-offsetting – in addition to continuing to invest in the development and use of sustainable aviation fuel (SAF). With this unprecedented announcement, United becomes the first airline in the world to announce a commitment to invest in Direct Air Capture technology.

“As the leader of one of the world’s largest airlines, I recognize our responsibility in contributing to fight climate change, as well as our responsibility to solve it,” said Scott Kirby, United’s chief executive officer. “These game-changing technologies will significantly reduce our emissions, and measurably reduce the speed of climate change – because buying carbon offsets alone is just not enough. Perhaps most importantly, we’re not just doing it to meet our own sustainability goal; we’re doing it to drive the positive change our entire industry requires so that every airline can eventually join us and do the same.”

Rather than simply taking a conventional approach to decarbonization by relying solely on the purchase of carbon offsets, United intends to make a multimillion-dollar investment in 1PointFive, Inc., a partnership between Oxy Low Carbon Ventures, a subsidiary of Occidental (NYSE:OXY), and Rusheen Capital Management. 1PointFive’s mission is to curb the rise in global temperatures by physically removing carbon dioxide (CO2) from the air using Direct Air Capture technology licensed from Carbon Engineering.

Direct Air Capture technology is one of the few proven ways to physically correct for aircraft emissions, and can scale to capture millions and potentially billions of metric tons of CO2 per year. The captured CO2 will then be permanently, safely and securely stored deep underground by Occidental, a process certified by independent third parties. The commitment – the first to be announced in the aviation industry – will help 1PointFive build the first industrial-sized Direct Air Capture plant in the United States. A single plant is expected to capture and permanently sequester one million tons of CO2 each year, the equivalent of the work of 40 million trees, but covering a land area about 3,000 times smaller.

With up to 80% less lifecycle carbon emissions than conventional jet fuel, sustainable aviation fuel is the fastest and most effective way United is reducing its emissions. Among all airlines globally, United holds more than 50% of all publicly announced future purchase commitments to using SAF and has the longest history of using SAF of any U.S. airline. Last year, United renewed its contract with Boston-based World Energy, agreeing to purchase up to 10 million gallons of cost-competitive SAF. United has used this SAF to help sustainably power every flight departing its Los Angeles hub since 2016.

Since 2016, United has used the most SAF of any airline globally and has flown:

United’s commitment to becoming carbon-neutral by 2050 represents yet another leadership position the airline has taken to reduce its impact on the environment. United’s significant environmental achievements include:

United’s award-winning Eco-Skies program represents the company’s commitment to the environment and the actions taken every day to create a more sustainable future. Earlier this month, the Carbon Disclosure Project named United as the only airline globally to its 2020 ‘A List’ for the airline’s actions to cut emissions, mitigate climate risks and develop the low-carbon economy, marking the seventh consecutive year that United had the highest CDP score among U.S. airlines.