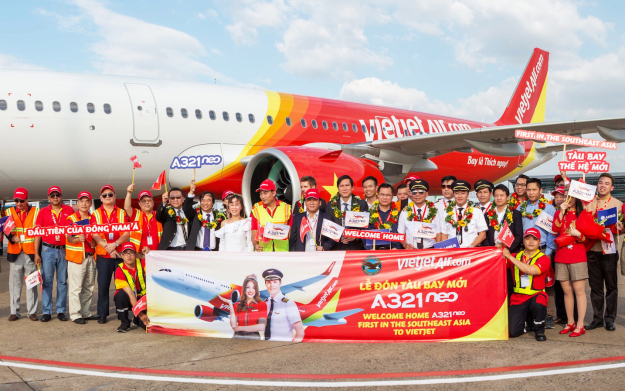 Vietjet has become the first airline in Southeast Asia to take delivery of an AIrbus A321neo (new engine option) after the Airbus aircraft landed at Tan Son Nhat International Airport from Hamburg, Germany. The A321neo, registered as VN-646, is powered by Pratt & Whitney’s latest-generation GTF engines.

Fitted out with 230 comfy leather-covered seats and high-quality carpeting, the first five rows of Vietjet’s spacious new A321neo have been especially designed to accommodate passengers flying Skyboss, the airline’s premium service. The aircraft’s interior also features a unique color-changing LED light system and striking décor to create a comfortable and refreshing ambience through the whole cabin.

The brand new A321neo incorporates the latest in engine design, advanced aerodynamics and cabin innovations. According to the aircraft manufacturer, its GTF engines offer a significant reduction in fuel consumption — at least 16 percent from day one and 20 percent by 2020 — as well 75% reduction in noise and 50% in emissions. The engines were first introduced by Pratt & Whitney in 2016. Vietjet is one of the very first airlines in the world to incorporate the engines to its aircraft. The A321neo is also the 17th aircraft delivered to Vietjet from Airbus in 2017.

The new aircraft will begin operating on domestic and international routes to and from Vietnam in January 2018. On receiving the aircraft, Vietjet also announced its decision to upgrade an existing order for 42 A320neo aircraft to the superior, and larger, A321neo models. Accordingly, the airline now has a total of 73 A321neo and 11 A321ceo on order for future delivery.

All photos by Vietjet.