Want your name on an airliner? American Airlines has the answer – Quantum Aviation | Airline Passengers & Cargo Sales and Charters 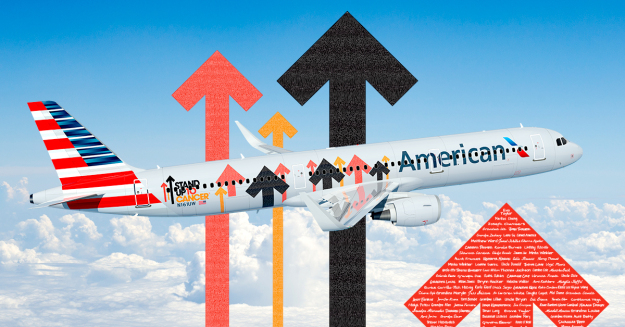 American Airlines has made this announcement:

American Airlines will provide a once-in-a-lifetime opportunity to add a loved one’s name to one of its planes in honor of those who are cancer survivors, current cancer fighters and those who lost their battle with cancer. Anyone who makes a donation of $25 or more to Stand Up To Cancer (SU2C) during the month of July can add the name of a person they stand up for to an American Airlines Airbus A321. The plane, which will begin flying this fall, will be wrapped with a special SU2C design that includes names submitted.

The campaign launches July 1 with a digital and television ad featuring Stand Up To Cancer Ambassador and superstar Tim McGraw alongside six American team members from across the U.S. Tim as well as each team member in this new campaign has been personally affected by cancer, either as a survivor or a co-survivor caring for a loved one fighting the disease.

“Every family in America has a cancer story, my own family included. Too many of us have lost our parents, children, spouses and friends to this terrible disease,” McGraw said. “I’ve been so touched by the stories of the American Airlines team members I’ve met over the past month and I’m honored to lend my voice to this campaign to help create a world where all cancer patients can become long-term survivors and have more time with the people they love.”

As part of the company’s multi-year, multi-million dollar collaboration with SU2C, 100% of donations received will go to support Stand Up To Cancer’s collaborative cancer research programs.

“Our national collaboration with Stand Up To Cancer was driven by their proven approach to cancer research and our corporate purpose to care for people on life’s journeys. In a few short years, we’ve seen donations contribute to scientific breakthroughs and more access to meaningful clinical trials,” said Elise Eberwein, Executive Vice President of People and Communications at American. “Today, we ask anyone who has been impacted by cancer join us in our shared goal to make every cancer patient a long-term survivor.”

To honor its own team members, the first names added to the plane will be those of American team members who self-identified as cancer survivors or are currently battling cancer.

“We are so honored to team up with American Airlines in this empowering campaign, which offers anyone who’s been affected by cancer the chance to join our mission, publicly honor a loved one and stand up to cancer,” said Rusty Robertson, a co-founder of Stand Up To Cancer. “American Airlines continues to be a tremendous supporter of SU2C, and the critical dollars raised by this incredible campaign expands our mission to accelerate the pace of cutting-edge research and innovative cancer treatments to save lives now.”

To make a donation to SU2C and add a name to this special plane, visit aa.com/standupbetween July 1–31, 2019. Donors can visit aa.com/standup again in late September to see the location of their submitted names on the plane before it begins flying in September. Terms and conditions apply.