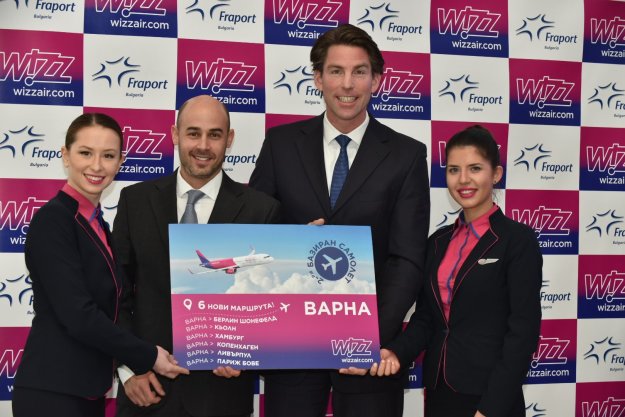 Wizz Air, the largest low-cost airline in Central and Eastern Europe and the leading airline of Bulgaria, has announced further capacity expansion to its Varna network, allocating an additional Airbus A320 aircraft, adding 6 new routes and updating the frequencies of some of the airline’s existing routes.

With the arrival of the new aircraft in Varna Wizz Air’s Bulgarian fleet will grow to a total of 9 aircraft, with 2 based in Varna and 7 in Sofia. The fleet growth will increase Wizz Air’s capacity in Bulgaria further by 14% year on year, manifesting in both new routes and frequency updates.

Starting in July 2019, the newest Wizz Air routes will connect Varna with three exciting German cities. The beautiful port town of Hamburg, Cologne the gothic gem and the remarkable cultural hub Berlin are all among the airline’s newest direct routes from Varna. The romantic vibes of Paris, the exciting Mersey-side in Liverpool and the historical harbors and the colorful creativity in Copenhagen are now available for passengers travelling from Varna at Wizz Air’s genuinely low fares.

Wizz Air’s first Varna flight took off in 2007 and since then, the airline has become the leading carrier at Varna Airport. In the first eleven months of 2018, Wizz carried over 400,000 passengers on its low fare routes to and from Varna representing 48% year on year growth, while more than 2.8 million passengers to and from Bulgaria, which represents 17% increase compared to 2017.

Wizz now offers more than 500,000 seats on its 14 routes from Varna, while in total more than 3 million seats on 49 services to and from Bulgaria in 2019, as it aims to create more opportunities for Bulgarian travellers and their visitors to enjoy low fares and outstanding travel experience.

All images by Wizz Air.