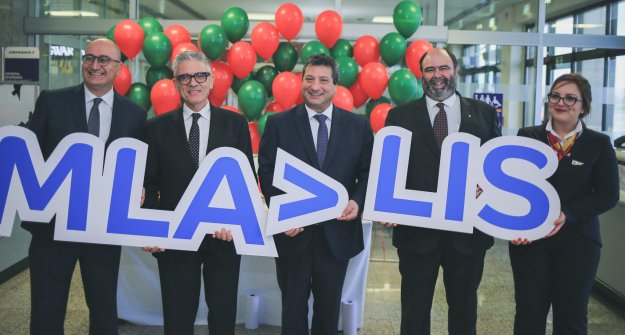 The airline made this announcement:

This week marks the start of five out of 15 new and exciting destinations in Air Malta summer schedule. The new schedule, which started today, Sunday March 25 sees the Maltese National Airline operating a total of 34 scheduled routes with over 180 return flights per week and three new intra-European services.

Air Malta will initially operate with a fleet of nine aircraft, however due to a significant increase in scheduled services adding London Southend, Cagliari and Catania and more frequencies to existing destinations, the airline has secured the lease of a brand new Airbus A320neo which will join the fleet in the coming months.

After many years, this summer’s schedule, will see the return of flights to three new countries; Morocco, Spain and Portugal through the launch of the Casablanca, Malaga and Lisbon routes respectively. And there is more good news. This summer the airline is offering thirteen new destinations including Cagliari, Comiso, Kiev, Tarbes–Lourdes, St Petersburg, Venice, Manchester, Frankfurt and London South End.

In other news, Air Malta celebrates 45 years since its setup. The airline issued this statement:

Air Malta was setup by a Resolution of Malta’s House of Representatives, on March 21, 1973, 45 years ago. The airline was registered as a limited liability company on March 30, 1973 and operated its first flight a year later on the April 1, 1974.

Starting with just 53,500 passengers carried in the first year of operations, Air Malta now carries 1.8 million passengers every year and the number is expected to exceed 2 million this year. Since its first flight the airline has carried over 55 million passengers to and from Malta.

Air Malta was set up with the primary aim to establish, maintain, develop and operate air transport services to and from Malta which, by the carriage of passengers, freight and mail, serve the national interest.

The airline was instrumental in opening up and connecting Malta to the rest of the world and vice versa, in the process diversifying and opening up new tourism markets for the local tourism industry.  It is a fact that were it not for the foresight of having a national airline and the continued efforts and investments from the airline over these 45 years, the local tourism industry would be nowhere close to where it is today.

Today the airline is one of the most important Maltese organisations not only assisting the tourism sector but also providing businesses that operate on the islands with a wide distribution network abroad for the carriage of passengers and cargo.

Air Malta is proud to celebrate its 45th Anniversary since its setup, acknowledging the contribution of all those people who believed in it from its inception and to those who have contributed to it for the past 45 years. The airline is also thankful to its loyal customers and dedicated employees who have worked for it throughout these years.

Photo Below: The Government of Malta signs agreement with PIA to help in the setting up of Air Malta.