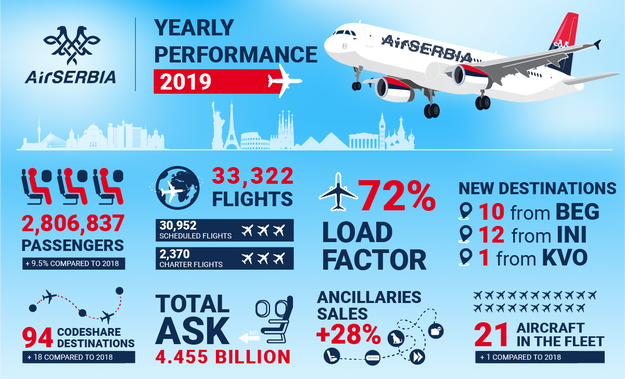 Air Serbia will increase the number of flights between Belgrade and Istanbul at the beginning of the high season, so that it will fly to the city on Bosporus seven times a week. The national carrier currently operates flights to the popular Turkish destination three times a week – Mondays, Wednesdays and Fridays.

Air Serbia restored the Istanbul route on December 11, 2019 after a two-and-a-half year break. National carrier’s aircraft are now landing at the new International Airport Istanbul, which was opened in 2018.

On the financial side, Air Serbia had a record year in 2019:

In addition to introducing new routes and establishing operations in two more airports in Serbia in 2019, Air Serbia delivered growth and accomplished record results in the number of passengers carried.

During the year, the airline carried a total of 2.81 million passengers on scheduled and charter flights, which represents a milestone result since it began operating as Air Serbia. The number of passengers carried increased 9.5 per cent, compared to 2018. Regular flights increased by 9 per cent, and charter flights by 23 per cent more passengers compared to the previous year. After a successful summer season, the positive results continued in the off-peak season period of 2019, when almost 25 per cent more passengers were carried compared to the same period last year. At the end of October last year, Air Serbia celebrated another historic moment and welcomed its 15 millionth passenger in its six years of operations.

During 2019, Air Serbia operated a total of 33,322 flights, 2,370 of which were charter flights of Aviolet, the charter brand of the Serbian national airline.

Network capacity, measured in Available Seat Kilometres (ASK), rose to 4.45 billion. The average passenger load factor in Air Serbia was 72 per cent in 2019, while sales of increasingly popular ancillary services grew 28 per cent.

Duncan Naysmith, Air Serbia CEO, stated: “In 2019, we delivered the largest network expansion and carried more passengers since we had started operations as Air Serbia. By launching new flights from as many as three airports in Serbia, we have confirmed our position of regional leader in the sphere of commercial aviation and given our contribution to the development of business and tourism in Serbia, as well as regional interconnectivity. During the previous year, we have carefully selected new destinations, further improving the integration of our international network and providing our guests with more choice and more benefits.”

Last year, the growth of network capacity of Air Serbia was enhanced with the launch of as many as ten new flights from its home Belgrade Nikola Tesla Airport – eight scheduled flights throughout the year to Kiev, Madrid, Barcelona, Rijeka, Krasnodar, Helsinki, Cairo and Istanbul, as well as seasonal flights to Nice and Zadar. During 2019, the national airline launched operations at two more airports in Serbia. Based on the results of an international tender for flights of public importance announced by the Government of Serbia, 12 new flights from the Niš Constantine the Great Airport were introduced, as well as a flight to Vienna from the Morava Airport near Kraljevo. The introduction of new flights last year expanded the network of the national airline to include 61 destinations. In spring, Air Serbia will also start operating seasonal flights to Thessaloniki from Kraljevo.

In 2019, the International Air Transport Association (IATA) certified Air Serbia for the level two NDC (New Distribution Capability) standard, placing it among leading international airlines which adapted their distribution systems to the latest forms of communication. Air Serbia thus became one of the first airlines in Southeast Europe to receive a level 2 NDC certificate, and the first airline in the world with the latest 19.2 version of the certificate, which defines the potentials for product distribution.

During the year, Air Serbia signed a new codeshare agreement with the Finnish airline Finnair, increasing the total number of codeshare partnerships to 14 and expanding its virtual codeshare network to 94 destinations.

During 2019, the national airline continued the digitalization and personalization of products, in line with the long-term strategy and international aviation trends.

In 2019, Air Serbia celebrated two important anniversaries – the sixth anniversary since it had started operating under that name, and the 92nd anniversary as the successor of its glorious predecessors Aeroput and JAT, which makes it the eight oldest airline in the world which is still in business.