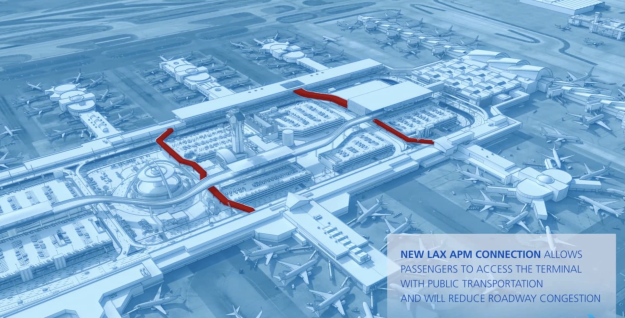 “Los Angeles stands at a global crossroads — a place where the world comes to meet, innovate and create,” Garcetti said. “American’s commitment to the reinvention of Terminals 4 and 5 will create good, middle-class jobs and better connect Los Angeles to the world.”

“Our mission to create a world-class airport can only be realized in collaboration with our airline partners like American Airlines, and we are grateful for the substantial commitment they have made to improving our guests’ experience at LAX,” Burton said. “We have set high expectations for LAX, and the project we are kicking off today will raise the bar for both American and this airport.”

In June 2017, American signed a letter of intent with LAWA, which set the framework for the carrier’s record investment. Now, less than 18 months later, construction is officially underway.

“Today marks an important milestone in the journey to creating an airport experience second to none,” said Flint. “The improvements included in the lease agreement between Los Angeles World Airports and American Airlines are ones that go to the heart of the guest experience. Working together with our airline partners as we reimagine our airport, we will transform LAX into the gold-standard airport that this city deserves.”

“American has proudly served Los Angeles for more than 70 years,” Parker said. “From the very beginning, when LAX first became a commercial airport in 1946, we’ve played a major role in keeping Southern California connected to the world. This remains one of the most important and fastest-growing markets for American, and today is a tremendous step forward as we continue to grow and strengthen our presence in the City of Angels.”

“Our $1.6 billion investment will not only transform the customer experience at LAX, it will also give our team members a better place to work every day,” Boda added. “It’s an exciting time for American Airlines. We’re investing back into our business and the communities we serve. That’s exactly what we’re doing here in Los Angeles, and thanks to our strong partnership with LAWA, the airport experience at LAX will soon set an example for the world.”

The future of LAX begins

The project will fully modernize and update the infrastructure of LAX’s two busiest domestic terminals. When completed, the new facility will create a world-class customer experience from end to end, with open and efficient check-in and security processing areas; more inviting gate areas with increased seating and access to modern amenities; and greater ability for airline operations to quickly adapt to and incorporate rapidly evolving new technologies.

Renderings released at the event show the unified departure hall, which will combine the entranceway of Terminals 4 and 5. Together with the secure-side bridge connecting Terminal 4 and the Tom Bradley International Terminal (TBIT), which was completed by American and LAWA in 2016, movement between terminals for connecting passengers will become significantly easier and more convenient.

The project will also reimagine the workspace of American’s 7,300-plus team members at LAX. Collaborative and open spaces will be designed to meet modern needs, with renovated break rooms; multi-use small and large meeting rooms; and team gathering spaces incorporated throughout the terminals.

Construction is now underway to reconfigure the Terminal 5 ticket lobby, allowing for the buildout of the Landside Access Modernization Project (LAMP) Core, a new facility being built in between Terminals 4 and 5 that will provide vertical circulation (elevators, escalators and stairs) for passengers arriving from the new Automated People Mover (APM) train system. From there, the project will continue in a carefully planned, phased approach that will move from curbside to gate areas.

In total, the project is expected to generate more than 6,000 jobs with more than 30 percent dedicated to local labor and 20 percent for minority- and women-owned business participation.

Additional benefits and features include:

American was one of LAX’s first commercial carriers and the airline continues to grow and strengthen its presence of 70-plus years at the hub through significant direct and indirect investments in the region.

In May 2017, Boda was named Senior Vice President of Los Angeles for American, a newly created position charged with developing and achieving the airline’s strategic goals in Los Angeles and throughout Southern California. Since 2013, the carrier has increased its employee presence in Los Angeles by nearly 60 percent, including the hiring of nearly 200 Mandarin- and Cantonese-speaking flight attendants and customer service agents. Today, American is the largest airline employer at LAX with more than 7,300 team members based at the hub, producing a $13.4 billion total economic output (direct, indirect and induced combined) in the greater Los Angeles area.

On Nov. 8, the Los Angeles County Economic Development Corporation (LAEDC) will recognize American as the 2018 Corporate Honoree at the 22nd annual Eddy Awards®. The Eddy Awards celebrate exceptional contributions to economic development in the L.A. region, consistent with LAEDC’s focus on increasing shared prosperity for residents and communities.

American is the largest carrier at LAX with more than 200 daily flights on peak days to 70 destinations and is the only airline with nonstop service to five continents. Since 2015, the carrier has added service to 26 new destinations from LAX, including Sydney; Hong Kong; Tokyo (Haneda Airport); Beijing; Auckland, New Zealand; and, most recently, Buenos Aires, making American the first and only airline to offer nonstop service from LAX to Argentina’s capital city.

In addition to strengthening the local economy, American has established strong partnerships with community organizations focused on education, human services and military/veterans initiatives. Highlights include:

The most premium amenities at LAX, complimented by a premium airport experience

With three Admirals Club lounges and the recent addition of a Flagship Lounge and Flagship First Dining, American offers the most premium amenities of any carrier at LAX.

The opening of Flagship First Dining last December gives American’s customers traveling in first class on qualifying international flights or on nonstop transcontinental flights to New York’s John F. Kennedy International Airport (JFK) exclusive access to a preflight tableside restaurant experience that offers complimentary, full-service dining with seasonal, locally inspired dishes and drinks. It is the first product of its kind to be offered by a domestic carrier at LAX.

The newly renovated Flagship Lounge, which also opened in December, allows customers flying in international first class or business class or on nonstop transcontinental flights to JFK an exclusive space to unwind, work or refresh before their flight. Customers can enjoy a range of food options, including a robust hot and cold buffet and a chef action station with freshly made-to-order dishes, along with the ability to pair meals with premium wine, champagne and spirits, or a refreshing drink from the “build your own cocktail” station.

Construction at Terminals 4 and 5 will occur in a carefully planned, phased approach to ensure a world-class experience for American’s nearly 16 million annual customers and more than 7,300 team members at LAX. The majority of the public-facing components of the project are expected to be complete in time for the 2028 Summer Olympics.

During construction, customers are encouraged to use the following tips and tools: