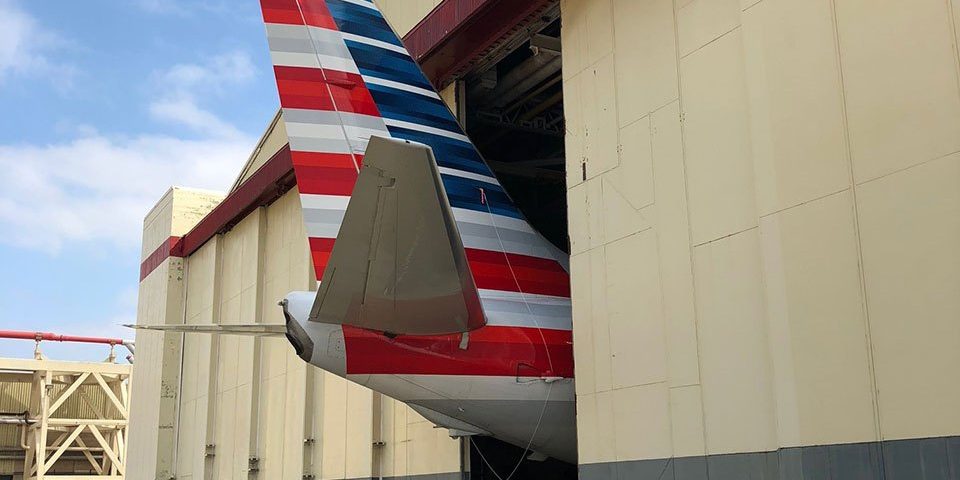 Hangar 2 is one of four hangars that were part of the original base when American relocated its Maintenance operation to Tulsa from LGA in 1946. The hangars were built to accommodate smaller aircraft than we commonly fly today. Most recently, Dock 2D was used for maintenance on the McDonnell Douglas MD-80.

The modification — nicknamed the doghouse because of how it looks from the front — allows larger aircraft to fit completely into the dock, including the tail. The hangar ceiling had to be raised to accommodate the tail section and the new slot, and various structural beams, utilities and wiring had to be reworked to create the slot opening. The hangar’s two smaller doors became one larger door, and another door was added for the tail slot itself. Three other docks in the Hangar 1/2 complex in Tulsa have received similar modifications over the last several years.

Dock 2D before the tail slot modification (left) and after, with the first Airbus A319 to visit Tech Ops – Tulsa parked inside

The $2.7 million Dock 2D project was supported with funding from Vision Tulsa, an $884 million sales tax renewal package approved by voters in 2016. Tulsa Mayor G.T. Bynum led the local delegation at the grand opening to highlight both the commitment the city and American have to each other and why they chose to invest in us.

“With the Vision Tulsa sales tax, Tulsans are investing in their city for continued economic development through projects such as this tail slot at the Tulsa Maintenance Base,” Mayor Bynum said. “We are proud to continue our many decades of partnership between the City of Tulsa and American Airlines.”

The modification is already paying off. The first aircraft to use Dock 2D after its reopening is the Airbus A319, which, until now, had never visited Tech Ops – Tulsa.

“I’ve worked at the Tulsa base for 23 years, and I’ve always thought it was good place to be,” said Crew Chief Jimmy Downing. “As a mechanic, I want to see all our space used, so it’s exciting to see this hangar space get modified. We’ve been hoping to see Airbus or other work here, and it’s nice to see it finally happening.”

The team will run a dedicated special visit line (additional work to prepare aircraft for the summer) this month, and scheduled A-checks with the Airbus will soon begin in Hangar 80.

“It is fantastic to have the A319 here at the Tulsa base, to jump on a near-term opportunity to accelerate summer readiness work and to capitalize on the Tulsa team’s training and readiness for the Airbus aircraft,” said Craig Barton, Vice President of Technical Services.

Erik Olund, Managing Director of Base Maintenance, added, “We are incredibly grateful for the support from the City of Tulsa for the tail modification. With this functional space, our team can stand ready to provide additional support for the operation as we stay focused on providing a world-class experience for our customers. I know our team will knock it out of the park.”