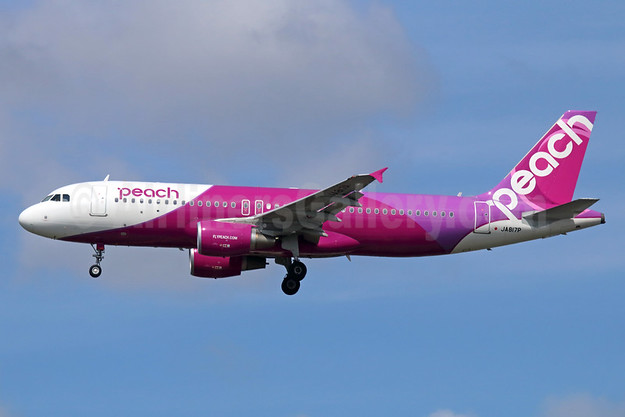 ANA – All Nippon Airways is planning to merge its partly-owned low-fare Peach Aviation and fully-owned Vanilla Air subsidiaries by March 2020. Peach will be the surviving brand.

The new Peach will be Japan’s largest budget airline.

ANA is also planning to expand its ownership in Peach from the current 67 percent to 77.9 percent.

Peach is planning to expand its fleet to more than 50 aircraft after the merger.

To further build on the respective successes of Peach Aviation Limited (Peach) and Vanilla Air INC. (Vanilla) and position them for future growth, ANA Holdings has announced the integration of its two subsidiary airlines, Peach and Vanilla, with the goal to become the leading low cost carrier (LCC) in the Asian region. The process of full integration is planned to start in the second half of the FY2018, with the target to be completed by the end of FY2019, with Peach being designated as the basis of the integrated airline.

Following the integration, the airline will serve as a strong foundation for further fleet growth and network expansions from Osaka Kansai Airport as well as from Tokyo Narita Airport. In addition, the airline will stimulate potential demand in Japan and from abroad through attractive service, various innovations and fares that exceed expectations.

History of the two LCCs:

Peach Aviation started its operations from Osaka Kansai Airport in March 2012 as the first Japanese branded LCC with the concept of “The Flying Train (safe, easy and cheap).” The carrier has raised the value of its customer experience through a number of ideas that were revolutionary to the aviation industry. Peach has been the leading carrier among the LCCs in Japan with its stable operational quality and its progressive management strategy.

Vanilla Air started its operations from Tokyo Narita Airport in December 2013. With the help of the huge demand in the Tokyo metropolitan area, the carrier actively expanded its network of domestic and international routes. One of the significant landmarks of Vanilla’s achievements is the revitalization of local Japan destinations such as Amami-Oshima, by creating and carrying new leisure demand to the region. Vanilla has also played a big role in bringing a large number of inbound passengers to Japan from Asian countries such as Taiwan.

Purpose of the Integration

The integration will combine and further enhance the strengths the two LCCs have today, and will create a stronger competitive advantage to further promote not only the Japan domestic service, but also capture the strong demand for visitors to Japan. Beyond FY2020, the airline plans to have more than 50 aircraft operating on more than 50 routes, up from the 35 aircraft today and the 39 routes currently served.

By FY2020, the integrated LCC plans to enter the mid-haul LCC market to aggressively incorporate the growing travel demand in Asia, and will also contribute to the Japanese government’s goal of 40 million people visiting Japan in 2020.

With target revenue of 150 billion Japanese yen and an operating profit of 15 billion Japanese yen for FY2020, the strategy will contribute to increased operational efficiency and reduction of unit costs. ANA group will maintain the strategic independence of the integrated LCC, and position the airline as an important pillar for greater profits and new opportunities for future expansion, and become the leading LCC in Asia.