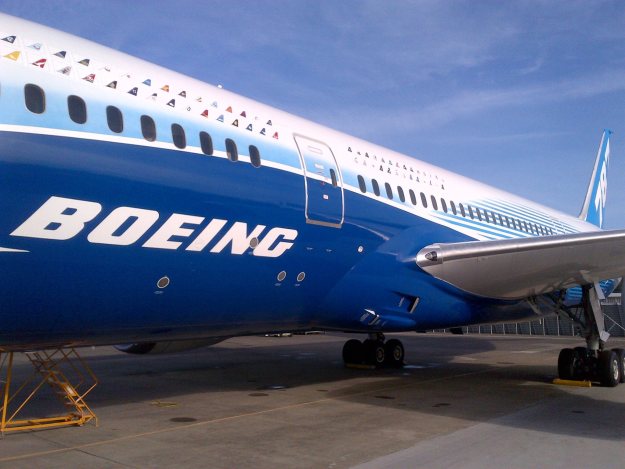 The company’s revenue guidance increased $1 billion to between $97.0 and $99.0 billion, driven by defense volume and services growth. Commercial Airplanes margin guidance is increased to greater than 11.5% on strong performance and Defense, Space & Security margin guidance was adjusted to reflect the impact of cost growth on the KC-46 Tanker program.

“We are seeing the results of our One Boeing approach as our teams work together across the Boeing enterprise to deliver value to our customers and grow our business.  In the quarter, we generated improved revenue and earnings, delivered strong cash and captured $27 billion in new orders,” said Boeing Chairman, President and Chief Executive Officer Dennis Muilenburg.

“We celebrated the first anniversary of the launch of Boeing Global Services and the one-year revenue service anniversary of the 737 MAX. We booked 239 net commercial airplane orders in the quarter, which included 59 787s – further demonstrating the value this airplane family brings to our customers. Solid progress continued on the 777X program with the first two test aircraft currently being built in the factory. We finalized the production contract for 28 F/A-18 Super Hornets for Kuwait, completed production of the 100th P-8 Poseidon, and conducted two successful tests for the U.S. Air Force’s Minuteman III. Our services business delivered the first 737 Boeing Converted Freighter and secured performance based logistics contracts to support rotorcraft in the Netherlands. Additionally, customers continued to recognize the value of our digital solutions with Etihad Airways signing a contract to implement our crew management solutions.”

“Continued services growth, increasing defense volume and strong performance of our commercial business, as well as our positive market outlook, give us the confidence to raise our revenue and Commercial Airplanes margin guidance for the year. We remain focused on execution, driving innovation, continuing to develop and maintain the best team and talent in the industry, and increasing value for our customers, shareholders, employees and other stakeholders.”

Operating cash flow in the quarter of $4.7 billion reflects planned higher commercial airplane production rates, strong operating performance, and timing of receipts and expenditures (Table 2). During the quarter, the company repurchased 8.6 million shares for $3.0 billion, leaving $12.0 billion remaining under the current repurchase authorization which is expected to be completed over approximately the next 18 to 24 months. The company also paid $1.0 billion in dividends in the quarter, reflecting a 20 percent increase in dividends per share compared to the same period of the prior year.

Total company backlog at quarter-end was $488 billion, up from $486 billion at the beginning of the quarter, and included net orders for the quarter of $27 billion.

Commercial Airplanes second-quarter revenue was $14.5 billion reflecting higher deliveries and mix (Table 4). Second-quarter operating margin increased to 11.4 percent, reflecting strong operating performance on production programs, including a higher 787 margin, partially offset by a charge of $307 million related to cost growth on the KC-46 Tanker program. This cost growth was primarily due to higher estimated costs of incorporating changes into six flight test and two early build aircraft as well as additional costs as we progress through late stage testing and the certification process. We continue to make steady progress towards final certification for KC-46 Tanker and recently completed all flight tests required to deliver the first aircraft, which is expected to be in October this year as now agreed upon with the U.S. Air Force.

During the quarter, Commercial Airplanes delivered 194 airplanes, including delivery of the first 737 MAX airplanes to Jet Airways, Ethiopian Airlines, and Xiamen Airlines. The 737 MAX program celebrated the one year anniversary of entering revenue flight service and continues to be well received in the market with over 4,600 orders since its launch. The 777X program remains on track for delivery in 2020 as the first two test airplanes moved into the low-rate initial production line.

During the quarter, Defense, Space & Security finalized a production contract for 28 F/A-18 Super Hornets for Kuwait, received contracts for 18 additional F/A-18 Super Hornets and 3 P-8 Poseidon aircraft for the U.S Navy, and was awarded a multi-year contract for 58 V-22 Osprey aircraft. Significant milestones during the quarter included induction of the first F/A-18 aircraft into the Service Life Modification program, two successful tests for the U.S. Air Force’s Minuteman III, and the completion of the 100th P-8 Poseidon aircraft. On the commercial satellites side, we successfully completed O3b mPOWER preliminary design review with SES.

Backlog at Defense, Space & Security was $52 billion, of which 35 percent represents orders from international customers.

During the quarter, Global Services was awarded an F/A-18 depot maintenance contract for the U.S. Navy and Marine Corps and secured rotorcraft performance based logistics contracts for the Netherlands. Global Services also contracted to implement crew management solutions at Etihad Airways and captured a Global Fleet Care contract for Primera Air’s 737 fleet. Global Services also entered into an agreement to acquire KLX Aerospace which will broaden our range of offerings and increase customer value, and agreed to a strategic partnership with Safran for auxiliary power units as we strengthen Boeing’s vertical capabilities and expand our services portfolio.

At quarter-end, Boeing Capital’s net portfolio balance was $3.0 billion. Total pension expense for the second quarter was $70 million, down from $94 million in the same period of the prior year. The change in earnings from other unallocated items and eliminations is primarily due to the previously announced litigation charge. The effective tax rate for the second quarter decreased from the same period in the prior year primarily due to the reduction of the federal tax rate to 21%.

We supplement the reporting of our financial information determined under Generally Accepted Accounting Principles in the United States of America (GAAP) with certain non-GAAP financial information. The non-GAAP financial information presented excludes certain significant items that may not be indicative of, or are unrelated to, results from our ongoing business operations. We believe that these non-GAAP measures provide investors with additional insight into the company’s ongoing business performance. These non-GAAP measures should not be considered in isolation or as a substitute for the related GAAP measures, and other companies may define such measures differently. We encourage investors to review our financial statements and publicly-filed reports in their entirety and not to rely on any single financial measure. The following definitions are provided:

Core operating earnings is defined as GAAP earnings from operations excluding the FAS/CAS service cost adjustment. The FAS/CAS service cost adjustment represents the difference between the FAS pension and postretirement service costs calculated under GAAP and costs allocated to the business segments. Core operating margin is defined as core operating earnings expressed as a percentage of revenue. Core earnings per share is defined as GAAP diluted earnings per shareexcluding the net earnings per share impact of the FAS/CAS service cost adjustment and Non-operating pension and postretirement expenses. Non-operating pension and postretirement expenses represent the components of net periodic benefit costs other than service cost. Pension costs, comprising service and prior service costs computed in accordance with GAAP are allocated to Commercial Airplanes and BGS businesses supporting commercial customers. Pension costs allocated to BDS and BGS businesses supporting government customers are computed in accordance with U.S. Government Cost Accounting Standards (CAS), which employ different actuarial assumptions and accounting conventions than GAAP. CAS costs are allocable to government contracts. Other postretirement benefit costs are allocated to all business segments based on CAS, which is generally based on benefits paid. Management uses core operating earnings, core operating margin and core earnings/per share for purposes of evaluating and forecasting underlying business performance. Management believes these core earnings measures provide investors additional insights into operational performance as they exclude non-service pension and post-retirement costs, which primarily represent costs driven by market factors and costs not allocable to government contracts. A reconciliation between the GAAP and non-GAAP measures is provided on pages 14-15.