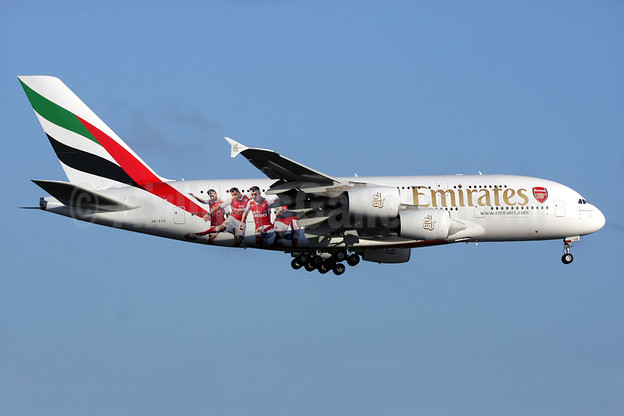 Emirates issued this report for 2017:

Emirates, the world’s largest international airline, is concluding another banner year of growth and innovation, marking significant milestones across its fleet, network, and product innovation initiatives, cementing its position as a market leader and industry trendsetter.

Since January 2017, Emirates has carried over 59 million passengers. The airline served over 63 million meals on its flights departing Dubai*, and moved over 35 million pieces of baggage in Dubai to its network of 156 destinations.

Emirates registered over 3,600 passenger flights on average per week, or over 191,000 flights in 2017, travelling more than 886 million kilometres around the globe, which is equivalent to over 16,000 trips to Mars.

Reflecting on the year, Sir Tim Clark, President Emirates Airline said: “Despite the ups and downs of 2017, Emirates delivered steady growth and we have come out stronger and even more resilient. Throughout the year, we challenged convention and acted nimbly to mitigate challenges and maximise opportunities. We implemented initiatives to boost revenues, trim costs, and used emerging technologies to make our business and operations more agile, without compromising on quality or service. We enter 2018 with optimism, and an unflagging drive to keep raising the bar in terms of customer experience and business performance.”

The airline marked 9 years of A380 operations and also celebrated its 100th A380 delivery milestone in November, strengthening Emirates’ position as the world’s largest operator of the iconic double-decker aircraft. The Emirates A380 has carried over 90 million passengers since its introduction in 2008.

Powering its fleet expansion and future growth, Emirates made global headlines at the Dubai Airshow when it placed a US $15.1 billion for 40 Boeing 787 Dreamliners. The order will enable the airline to maintain a young and efficient fleet, complementing its Boeing 777 and A380 fleet by providing more flexibility to serve a host of new destinations and help unlock further growth.

To meet the growing demand for highly skilled commercial pilots, 2017 also saw the opening of the Emirates Flight Training Academy, one of the most advanced aviation training facilities in the world providing a complete integration of next-generation flight training. Emirates’ investment in the academy underscores its commitment to support and develop pilots for its own operations as well as for the broader aviation industry.

Emirates expanded its network to 156 destinations in 2017, with the addition of three new passenger destinations: Newark, USA via Athens; Zagreb, Croatia; and Phnom Penh, Cambodia.

In addition, Emirates boosted frequencies and upgraded capacity to several points across its network, reaffirming the airline’s commitment to offer greater choice and connections for its customers.

Emirates expanded the number of cities served by its flagship A380 in 2017 aircraft to 48, with the launch of five new A380 destinations: Tokyo-Narita, Casablanca and São Paulo, Nice and Johannesburg.  Emirates also layered on more A380 services to the schedules of existing points and also led one-off A380 services to four destinations: Boston, Colombo, Warsaw and Bahrain.

In July, Emirates entered into a significant partnership with FlyDubai, which includes an extensive codeshare agreement, strategic schedule alignment, as well as optimising synergies to eventually offer travellers access to over 200 destinations on the combined networks of both airlines. In October, Emirates and Qantas announced the extension of their successful partnership until 2023, with proposed network changes that would deliver greater year-round frequency and more services to Australia and New Zealand.

Emirates SkyCargo also continues to play an integral role in the airline’s expanding operations, and in 2017 carried 2.5 million tonnes of freight. Emirates SkyCargo created new benchmarks in the air cargo industry with its specialised transportation solutions for industry verticals, including pharmaceuticals. With the introduction of Emirates Pharma, the carrier saw a 38% growth in the volume of pharmaceutical cargo its launch. In May, Emirates SkyCargo and Cargolux Airlines entered into a strategic operational partnership, the first of its kind in the air cargo industry, which saw both carriers working closely on a number of operational aspects including enhancing capacity from key markets, optimising networks as well as boosting belly cargo feeder traffic and hub connectivity capabilities. In October, the two carriers extended the partnership with a codeshare agreement.

Emirates pursued its product and service goals in 2017 with an unwavering focus on providing a strong customer-centric proposition.

The year began with Emirates’ operations being challenged by short-notice changes to entry requirements into the US, the cabin electronics ban and updated security measures. Emirates responded by introducing a complimentary tablet and laptop handling service on the ground, and providing a tablet loan service to its premium passengers onboard.

In March, the airline launched its enhanced A380 Onboard Lounge, featuring an airier look and feel; new seating arrangements; private yacht-inspired décor, as well as new high-tech touches including lighting and surround sound.

In November, Emirates unveiled its game-changing, fully enclosed Boeing 777-300ER First Class private suites (above), part of a multi-million dollar upgrade that saw enhancements across all cabin classes.  Inspired by the Mercedes Benz S-Class, the suites offer up to 40 square feet of private space, as well as personal lighting and climate control features. World-firsts include a NASA inspired ‘zero-gravity’ seating position, and virtual windows in the middle aisle which project an outside view using real-time camera technology. First Class passengers also have the luxury of easily communicating with cabin crew through the personal video-call function.

Over 10 million passengers connected to Wi-Fi onboard Emirates flights in 2017, reinforcing the importance of connectivity in the air. Emirates’ industry leading inflight entertainment system, ice, closed the year with over 3,000 channels of entertainment, and continued to win accolades with its 13th consecutive World’s Best Inflight Entertainment award at Skytrax World Airline Awards 2017.

On the ground, Emirates expanded its lounge network with the opening of new facilities at Boston Logan International Airport taking the total number of dedicated Emirates Lounges globally to 41. It also refurbished existing lounges in Singapore and Bangkok. In addition, Emirates opened pay-per-visit access to its lounges at Dubai International Airport for its Skywards members and their guests, regardless of their class of travel. As a result, more than 4 million passengers have been able to experience Emirates’ seven lounges in Dubai in the past year. Emirates also partnered with BMW Group to provide luxury automobiles for its complimentary Chauffeur-drive service for Business Class passengers in the UAE.

Improving the on-ground customer experience further, Emirates and its partners announced the ‘Together’ initiative, a collaboration for a streamlined airport experience with the implementation biometric technology and new automated border control gates, expediting a smoother passenger flow through vital touch-points at Dubai International Airport.

Emirates Skywards, the airline’s popular loyalty program, hit the 19 million member mark mid-2017, with over 40 billion Miles cashed in for upgrades, reward flights, culture and sports events, as well as benefits and privileges across the programme’s network of partners. Over 400,000 upgrades were redeemed by Emirates Skywards members in 2017, brought about by easier access through digital channels. The year has also seen the introduction of a number of new air, travel and lifestyle partners with a seamless online and mobile earn and redemption customer experience, including a first in the use of blockchain technology in the loyalty space.

Emirates’ continual efforts to deliver the best possible customer experience were rewarded when it was recognised as the Best Airline in the World in the inaugural TripAdvisor Travelers’ Choice® Awards for Airlines.

Emirates continued to invest in its brand. In August, Emirates extended its title partnership with the prestigious FA Cup through to 2021. That same month, the airline renewed its European Tour Agreement for another four years. The new deal includes Emirates becoming an Official Partner of the 2018 Ryder Cup, an event which brings together 24 of the top golfers from Europe and the USA.

In October, Emirates launched a US$15 million campaign to inspire travel and promote the airline’s extensive network of global destinations including its home, Dubai. The campaign used the classic tune, “Don’t stop me now” by British rock band Queen, and the ads utilized clever filming techniques, shifting between key destinations and Emirates’ onboard experiences, to tell a story of “a picture within a picture”.

During the Dubai Airshow, Emirates offered spectators a special fly-past that featured its Boeing 777-300ER and A380 performing a flying display with the UAE’s air display team, Al Fursan. Both the Emirates 777-300ER and A380 flying display aircraft were emblazoned with the HH Sheikh Zayed decal as a tribute to the late founding father of the UAE.

*Flight figures are for the calendar year 2017