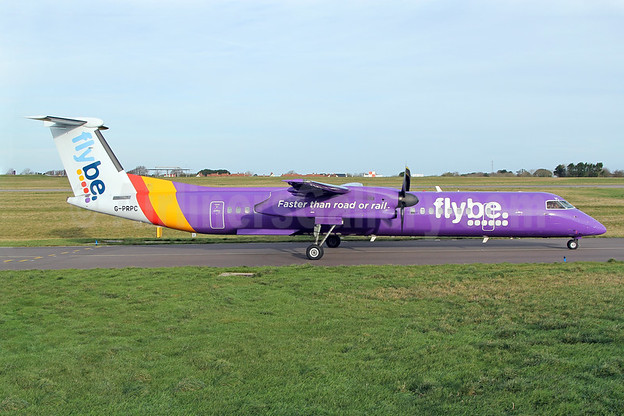 Flybe made this announcement:

After a comprehensive review of regional aircraft options, Flybe Group plc (‘Flybe’), Europe’s largest regional airline, has concluded that the Bombardier Q400 is the best core aircraft for its current and future needs. It will therefore remain as the backbone of the Flybe fleet for the foreseeable future.

The Q400 is faster than the alternative turboprops, with a performance close to jet aircraft over the relatively short sectors that Flybe operates. In addition, with excellent operating economics including turboprop fuel efficiency, it is cheaper to operate than similar-sized jet aircraft, and has a much smaller noise footprint. Flybe will however continue to operate a number of Embraer E175 jets for longer or busier routes.

Flybe’s stated strategy is to reduce its overall fleet and to concentrate on profitable routes only. In the past twelve months, Flybe handed back six older end-of-lease Q400s. With a further planned handback of all nine Embraer 195 jets, the overall fleet is well on the way to reducing in size from 85 at its peak in May 2017, to a target of around 70 aircraft by early 2020.

Flybe’s Q400 fleet remains a relatively young one, with an average age of just over 10 years. The airline has accordingly concluded that it will retain its remaining Q400 aircraft and, where economic, extend their service lives. This will save considerable capital expenditure over the next few years, by avoiding the requirement to acquire new aircraft.

Flybe still has a heritage order for four Embraer E175s due in 2019. These will be delivered with new ‘winglet technology’ to help reduce fuel consumption. Apart from these, Flybe is not planning any additional new aircraft orders for the foreseeable future.

Flybe CEO, Christine Ourmières- Widener said: “Flybe’s strategy is to reduce the fleet size to an optimum level and make the business demand-driven rather than capacity-led. Our fleet configuration is an important part of that strategy. We examined exhaustively all the options and concluded the Bombardier Q400 is the best core aircraft for us. Its superior economy, speed and quietness is ideal for a regional airline such as ourselves. Together with a number of Embraer E175s, our future fleet will be the optimum required for our specific regional route network.”

Fred Cromer, President, Bombardier Commercial Aircraft added: “We are delighted that Flybe, our long-term customer and largest Q400 operator, remains committed to the Q400 as its preferred turboprop. With its jet-like performance, industry-leading reliability and unbeatable economics, we are glad that the Q400 turboprop will continue to support Flybe as the airline further imposes itself as one of Europe’s leading regional providers.”

John Slattery, President & CEO of Embraer Commercial Aviation commented: “Flybe’s commitment to the E175 as its regional jet of choice is a great endorsement of the type as a key part of its wider fleet. Now, introducing in its fleet the most updated version of the E175 with lower fuel burn, Flybe will enjoy even greater operating economics on their jet-service routes. We are looking forward to continuing to support and work with Flybe in the future.”