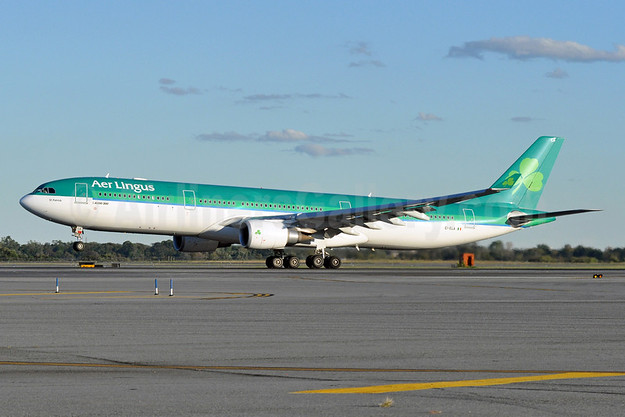 The IAG is the holding company of Aer Lingus, British Airways, Iberia, Level and Vueling.

“We’re reporting a good quarter 3 performance with an operating profit of €1,460 million before exceptional items, up from €1,450 million last year.

“These were strong results despite significant fuel cost and foreign exchange headwinds. At constant currency, our passenger unit revenue increased by 2.4 per cent while non-fuel unit costs went down 0.7 per cent.

“We’re pleased to announce an interim dividend of 14.5 euro cents per share and this week we completed our second €500 million share buy-back programme”.

At current fuel prices and exchange rates, IAG expects its operating profit before exceptional items for 2018 to show an increase of around €200m from a base of €2,950m in 2017. Both passenger unit revenue and non-fuel unit costs are expected to improve at constant currency for the full year.

Top Copyright Photo: Aer Lingus Airbus A330-302 EI-ELA (msn 1106) JFK (Stephen Tornblom). Image: 910752. The desire to create larger profits are driving an upcoming livery change at Aer Lingus. Look now, the amount of green is expected to be significantly reduced with the upcoming new livery. The first Aer Lingus aircraft in the new colors is expected at the end of January, 2019. The pictured Airbus A330-302, registered as EI-ELA, will probably be the first aircraft to be repainted (always subject to change). The new livery is expected to be something like Iberia Express with green engine cowlings and a dark green shamrock on the tail with two cheat lines down the fuselage. The size and style of the titles are still under discussion pending a final livery decision.

In other news, Aer Lingus is expecting their first Avro (BAe) RJ85 (EI-RJN) on Sunday with Aer Lingus titles and a shamrock in green decals.