International tourism is booming, but not to the US – Quantum Aviation | Airline Passengers & Cargo Sales and Charters 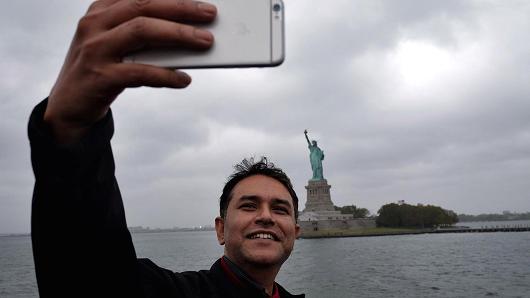 International tourism is growing at its fastest clip in seven years, but the U.S. is on pace for its sharpest drop in foreign travelers since the wake of the recession.

In the first seven months of 2017, the U.S. took in 41 million international visitors, a 4 percent decline from the year-earlier period, according to the Commerce Department. That follows a more than 2 percent drop a year earlier.

Tourism and retail industry leaders this week launched the Visit U.S. Coalition, which wants backing from the Trump administration to help stem the decline. The coalition was founded by U.S. Travel, a lobbying group whose members include Marriott International and Macy’s.

“Fewer visitors means fewer hotel stays, fewer meals eaten in our restaurants, fewer goods purchased in our retail stores, and fewer visits to our national attractions. It also means fewer American jobs and a loss to our economy,” said Katherine Lugar, president and CEO of the American Hotel & Lodging Association, a coalition member. “We are committed to working together with the Administration to balance a welcome message with strong security to ensure we don’t fall behind to other countries.”

Roger Dow, president and CEO of U.S. Travel, called some of President Donald Trump’s rhetoric “not helpful” but stopped short of blaming him or his policies for the drop directly. Dow pointed to a strong dollar and competition from other nations.

The White House did not immediately respond to a request to comment.

U.S. Travel, whose aim is to boost tourism in the United States, has had its share of headaches under the administration and has weighed in during various travel bans, the short-lived laptop ban and more stringent visa checks for international visitors.

“Mr. President, please tell the world that while we’re closed to terror, we’re open for business,” Dow said last March. “Imbalanced communication is especially susceptible to being ‘lost in translation’ — so let’s work together to inform our friends and neighbors, who could benefit from reassurance, not just who is no longer welcome here, but who remains invited to invest and vacation here.”

If the U.S. had maintained its market share of global long-haul travel over the past two years, it would have meant 100,000 new jobs and more than $32 billion in spending, U.S. Travel estimated this week.

The U.S. travel industry is no stranger to downturns, but this one is occurring at a time of economic growth. Previous slumps occurred in the wake of the financial crisis and Great Recession or after the terrorist attacks of Sept. 11, 2001.

Globally, a record 1.32 billion tourists traveled internationally in 2017, a 7 percent increase from a year earlier, the fastest pace since 2010, according to a projection from United Nations World Tourism Organization. While the U.S. is on track to post a decline for 2017, European tourist arrivals surged 8 percent to 671 million, and every other continent posted an increase, the UNWTO said.

From 2015 to 2017, the United States and Turkey posted a decline in long-haul travel, according to U.S. Travel. Meanwhile, Saudi Arabia, Canada, the U.K. and Australia all logged double-digit increases.

Not only were fewer travelers here but spending also dropped. The Commerce Department said international traveler spending dropped more than 3 percent in the first 11 months of 2017. U.S. Travel said this equals the loss of $4.6 billion and 40,000 jobs.

NYC & Co., a marketing agency for New York City tourism, said it expects that the city took in 100,000 fewer international tourists in 2017, the first decline since the recession, while domestic travel increased.

But international travelers are extremely valuable for hotels, restaurants and retailers. They accounted for about 48 percent of the total direct spending in the city, but were 21 percent of visitors, said Kim Klein, NYC & Co.’s director of public relations.

Los Angeles appears to be bucking the trend. The city attracted a record 48.3 million tourists last year, its tourism board said last week.

But the tourism board hasn’t been complacent. Last year, shortly after the travel ban on visitors from majority-Muslim countries, the board launched a campaign with the slogan “Everyone is Welcome in L.A.”

“We have a delegation headed to Mexico next week,” said Jamie Foley, the board’s vice president of global communications. “We think our timing couldn’t be more critical.”