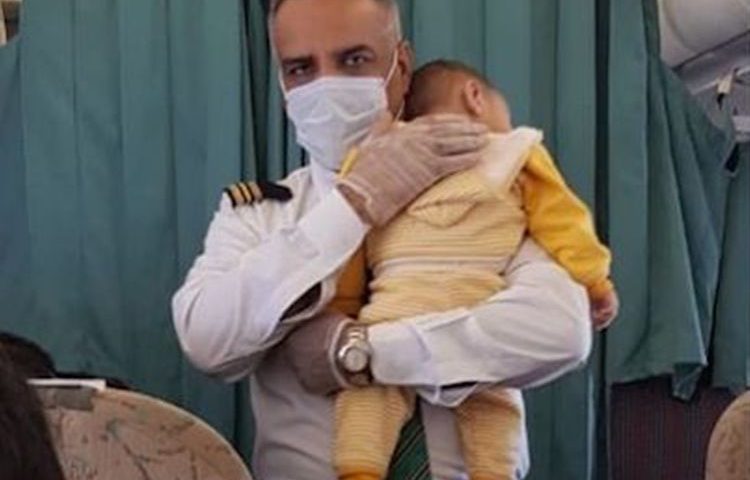 Islamabad: A Pakistan International Airlines (PIA) flight attendant is being praised after he went above and beyond the call of duty to soothe a crying baby on a flight.

Touheed Ahmad Daudpota was on the PK-301 flight from Islamabad to Karachi on March 11 when he noticed a mother having a hard time calming her baby. He immediately stepped in to comfort the tot and give the stressed mother a break. This little act of kindness turned Daudpota into a national hero as his photo of the feel-good moment went viral.

Daudpota was hailed as a hero on social media, earning widespread praise. This week, the UN Women Pakistan declared him a HeForShe Champion “for displaying empathy, gender sensitivity, respect and care” to a woman passenger. “A small act of kindness indeed goes a long way!” wrote UN Women Pakistan on social media, introducing their new HeforShe Champion, Touheed Daudpota, to the world.

— PIA (@Official_PIA) March 22, 2021The heart-warming sight was first shared on Twitter with this caption: “Now that truly is great people to fly with” – the slogan of Pakistan’s national flag carrier.

Daudpota, who hails from Shikarpur town in Pakistan’s southern Sindh province, said that he decided to help the passenger out after two women cabin crew members could not calm down the sobbing baby. “The woman was flying alone with two kids and looked really exhausted. So I offered help to soothe the crying toddler” the flight purser said.

“I had no idea someone would take photos and share it on social media that later earned me the UN recognition,” Touheed Daudpota shared during a TV interview. “Flying with toddlers can be stressful. I helped the passenger as any crew member would do to make sure everyone has a safe and comfortable flight.”

Elated by the recognition, the crew member who has been a PIA employee for 34 years, hopes that his act of kindness would encourage more men to get involved in parenting. Although mothers take greater responsibility in childcare but “both mother and father must equally be involved in taking care of their children” he said.