Qatar Airways touches down for the first time in Canberra, will fly to Mykonos – Quantum Aviation | Airline Passengers & Cargo Sales and Charters 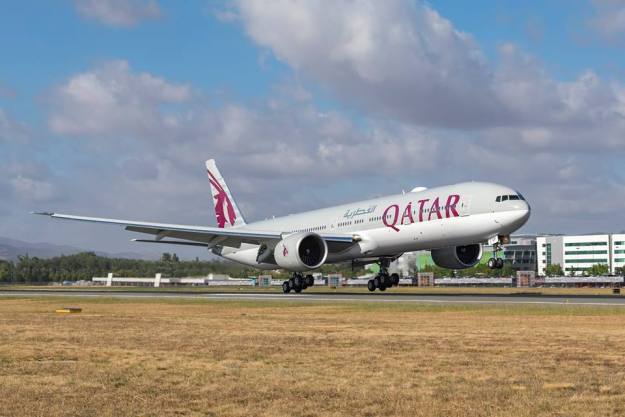 The first Qatar Airways flight from Doha to Canberra, the capital city of Australia, touched down on February 12, 2018 at Canberra Airport, where it was welcomed with a celebratory water cannon salute (below).

Qatar Airways will operate its daily Canberra service with a Boeing 777 aircraft, which features 42 flatbed seats in Business Class and 316 seats in Economy Class. Passengers will be able to enjoy the airline’s superior entertainment system offering a wide variety of entertainment options.

The inaugural flight was operated by a Boeing 777 fitted with the airline’s revolutionary Qsuite. Qsuite includes an abundance of Business Class extravagance, including the industry’s first fully lie-flat double bed in Business Class, a revolutionary quad design offering passengers a private and fully adaptable space – the first and only of its kind – in addition to movable TV monitors and privacy dividers, which transform the space into an area perfect for socialising.

With the airline launching a new daily service to Canberra, its fifth destination in Australia, the total cargo capacity out of the Australian continent has increased to more than 630 tonnes per week. Qatar Airways Cargo offers exporters in Australia its innovative QR Fresh solution for the air freight of Australian meat and other perishable products throughout the world via its state-of-the-art hub in Doha. Its Quick Ramp Transfer (QRT) offers the fastest shipment transfer at Hamad International Airport and the use of reefer vehicles at its hub ensures seamless temperature control for perishable products.

In other news, Qatar Airways will start the Doha – Mykonos, Greece starting on May 30, 2018. The new route will operate four days a week with Airbus A320 aircraft according to Airline Route.