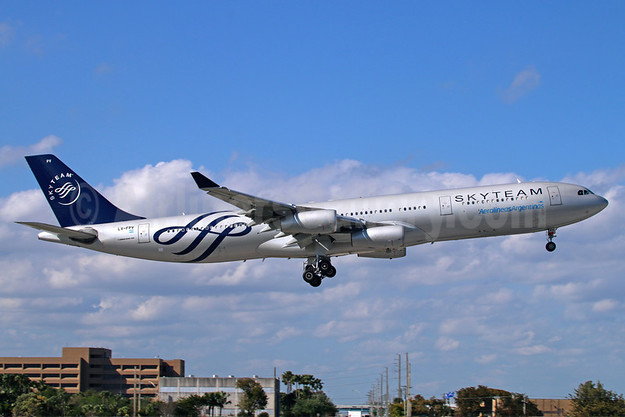 On December 9, 2019, at exactly at 3.38 am, Aerolineas Argentinas Airbus A340-313 LV-FPV landed at Ezeiza International Airport in Buenos Aires in the SkyTeam Livery.

The milestone flight was flight AR1133 from Madrid and it was also was the last commercial flight of this plane.

The story of the airframe began in October 2013 when the aircraft came from Iberia where it was flying for 16 years with the registration of EC-GPB.

After the last revenue flight, the aircraft went into maintenance, revision and repair before being returning to the lessor. The day came. On Thursday, December 26, 2019, the A340 flew again but this time without any markings of Aerolineas Argentinas or SkyTeam, only a gray coating covering the fuselage and blue on the tail.

The return flight lasted 2 hours and took place over the province of Buenos Aires. After departing from Ezeiza, the A340 flew over Mar Del Plata at 31,000 ft and Bahia Blanca in the south of the province. Finally the aircraft made a “go-around” on runway 11 and after that landed.