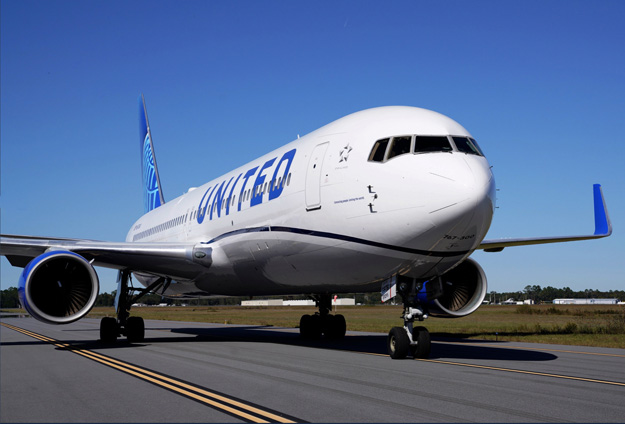 United Airlines has made this announcement:

United Airlines continues to lead the industry towards a more sustainable future with the launch of the first-of-its-kind Eco-Skies Alliance SM  program. Working with the airline, more than a dozen leading global corporations will collectively contribute towards the purchase of approximately 3.4 million gallons of sustainable aviation fuel (SAF) this year. With its nearly 80% emissions reductions on a lifecycle basis compared to conventional jet fuel, this is enough SAF to eliminate approximately 31,000 metric tons of greenhouse gas emissions, or enough to fly passengers over 220 million miles.

As inaugural participants, the following companies are taking a lead within their respective industries, reducing their aviation-related impact on the environment at the source, and creating demand for more SAF production.

“While we’ve partnered with companies for years to help them offset their flight emissions, we applaud those participating in the Eco-Skies Alliance for recognizing the need to go beyond carbon offsets and support SAF-powered flying, which will lead to more affordable supply and ultimately, lower emissions,” said United CEO Scott Kirby. “This is just the beginning. Our goal is to add more companies to the Eco-Skies Alliance program, purchase more SAF and work across industries to find other innovative paths towards decarbonization.”

United has made the airline industry’s single largest investment in SAF and has purchased more SAF than any other airline in the world. World Energy, a long-term partner of United, will supply the SAF to Los Angeles International Airport (LAX), which makes it conveniently accessible to United’s operations.

In addition to the Eco-Skies Alliance program, United is giving customers the ability to contribute funds for additional SAF purchase or for use on initiatives United believes will help decarbonize aviation – the first of any U.S. airline to do so. Understanding there is a growing interest among customers for real, lasting solutions, this new capability will be available starting immediately via portal on united.com/ecoskiesalliance.

Advocating for sustainable travel, together with United

Strong federal and state policy leadership will be essential to reducing the climate impacts of air travel, so starting immediately United will help individuals connect with elected representatives to advocate for policies that would make air travel more sustainable for the long term. United will be the first airline in the world to connect customers directly with policy makers to voice the support that is needed to advance and accelerate permanent, scalable solutions that hold the potential to decarbonize the air transportation industry – and not just offset emissions.

“We know there is a growing demand from a wide range of our customers including corporations, cargo shippers and individuals who share the same concern we do – that climate change is the most pressing issue of our generation,” Kirby said.

At United, we believe the airline industry needs to be bolder when it comes to making decisions that confront the climate crisis. That’s why we’ve committed to become 100% green and reduce our greenhouse gas emissions 100% by 2050 by taking the harder, better path of reducing emissions from flying, rather than relying on traditional carbon offsets.

Here are some of the ways we’re making sustainability the new standard in flight:

We were founded on this day in 1926. pic.twitter.com/pOf4uMZsoZ

United’s award-winning Eco-Skies® program represents the company’s commitment to the environment and the actions taken every day to create a more sustainable future. The Carbon Disclosure Project (CDP) named United as the only airline globally to its 2020 Climate ‘A List’ for the airline’s actions to cut emissions, mitigate climate risks and develop the low-carbon economy, marking the seventh consecutive year that United had the highest CDP score among U.S. airlines.

In 2017, Air Transport World magazine named United its Eco-Airline of the Year for the second time since the airline launched the Eco-Skies program. Additionally, United ranked No. 1 among global carriers inNewsweek’s2017 Global 500 Green Rankings, one of the most recognized environmental performance assessments of the world’s largest publicly traded companies. For more information on United’s commitment to environmental sustainability, visit united.com/sustainability.