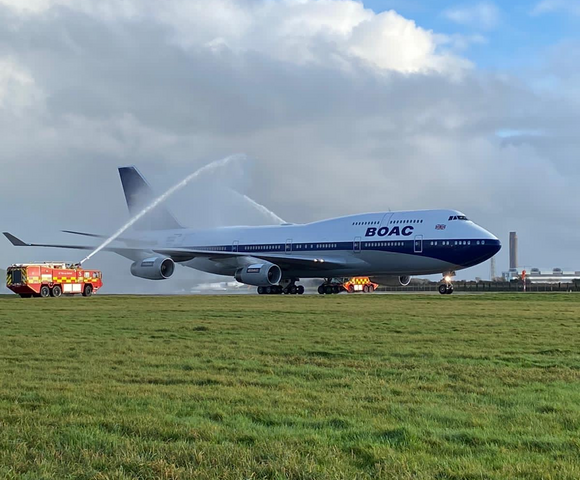 Today saw the very last British Airways flight of its iconic 747 (‘Queen of the Skies’) as it made its final journey from Cardiff Airport to its new home at eCube Solutions in the Vale of Glamorgan in South Wales, where it will be preserved to inspire future generations.

Wrapped in the BOAC retro ‘Gold Speedbird’ livery to mark British Airways’ centenary in 2019, the 747-400, registration G-BYGC, took to the air for the final time from British Airways’ engineering base at Cardiff Airport as flight BA747P, where it was waved off by engineers who for many years have proudly maintained the 747 fleet.

The aircraft flew around this scenic area of the Welsh coast before landing at the commercial airfield at Bro Tathan, the Welsh Government’s 1,200 acres business park in the Vale of Glamorgan, where it was met by an audience of invited guests including British Airways cabin crew, all of whom have fond memories of serving on board our jumbo jets. G-BYGC will be managed by eCube Solutions, the leading aircraft disassembly and end of life services provider based on the business park, to showcase the pre-eminent contribution the 747 fleet made to British Airways, and the love of aviation for the passengers who flew on them.

Since entering the British Airways fleet on 20 January 1999, G-BYGC has operated 11,049 flights and flown for 91,023 hours over nearly 45 million miles. Its last passenger flight was from San Francisco to Heathrow on 4 April 2020. The retirement of the British Airways 747 fleet has been brought forward several years as a consequence of the Covid-19 pandemic.

Sean Doyle, British Airways’ CEO, said: “This final 747 journey is a bittersweet moment for the many thousands of British Airways customers and crew who have flown the world on these Queens of the Sky over the last five decades.

“But while we will certainly miss their majestic presence in the skies above, knowing our last 747 will be preserved for future generations to enjoy at a new home in Wales gives us a great sense of pride and is a fitting end to this chapter of British Airways’ history.”

eCube Solutions Managing Director Peter Dunsford said: “eCube Solutions is delighted to receive the very last British Airways 747. This iconic aircraft has a lot of very loyal followers with fond memories and attachments to the aircraft type. As Europe’s leading provider for aircraft end of life services including component removal, disassembly and recycling, we strive to provide both airlines and aircraft owners with maximum value from a retired aircraft. We can assure everybody that this aircraft will continue to be utilized and enjoyed in many different ways for many, many years to come.”

The flight crew for this final journey were Captain Al Bridger, British Airways’ Director of Flight Operations, Captain Rich Allen-Williams, Captain Di Wooldridge and Captain Arun Sharma. They travelled with a pair of stunning limited-edition BOAC carry-on suitcases created by luxury travel brand Globe-Trotter to commemorate the final 747 journey. Taking inspiration from the aircraft’s iconic livery, the suitcases were handmade in England and incorporate the iconic ‘Gold Speedbird’ insignia and a precious fragment from a retired British Airways Boeing 747 aircraft.